The Laurel County Sheriff's Office lost the recording of the interview with Ashley Goforth, 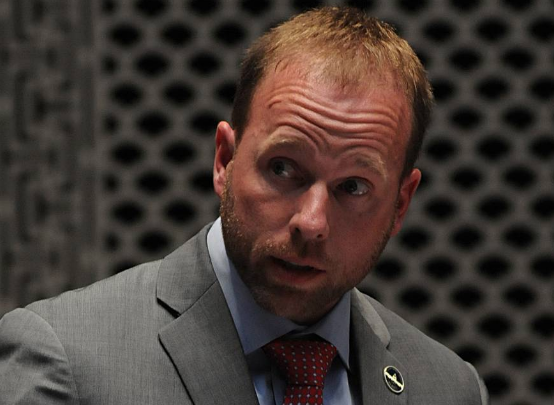 Police have lost a potentially important piece of evidence in the case of a Kentucky state representative accused of strangling his wife, according to defense attorneys.

The evidence at issue is a digital recording of police interviewing the wife of Rep. Robert Goforth, a Republican from Laurel County.

Ashley Goforth told police shortly after the alleged assault that her husband tried to "hog tie" her during an argument and then wrapped a computer cable around her neck so tightly she had trouble breathing and thought she was going to pass out, according to the citation in the case.

The Laurel County Sheriff's Office lost the recording of the interview with Ashley Goforth, defense attorneys Willis Coffey and Conrad Cessna said in a court motion.

"It certainly is odd, in a case with the public scrutiny as great as this one, that law enforcement would 'lose' the alleged victim's recorded interview," Robert Goforth's attorneys said in the motion.

Defense attorneys asked Circuit Judge Michael O. Caperton to either suppress the statement from Ashley Goforth or, if the tape isn't found and the case goes to a jury, to tell jurors that if the recording had been available it would have been favorable to Robert Goforth's defense.

The motion is scheduled for a hearing next month.

John Inman, an officer with the sheriff's office, said he received a call that there was a woman at the dispatch center who wanted to speak with an officer.

Inman said Ashley Goforth reported that Goforth had assaulted her while their children were present and said he would kill her.

Inman said he could see marks on Ashley Goforth's arms and neck and a knot on her forehead. She told Inman that she was able to get away after promising to unlock her cell phone, according to the citation.

The two reconciled soon after and Ashley Goforth asked that her husband not be indicted, calling him a loving husband and devoted father.

"We have both sought spiritual and family counseling as we continue to work on our personal issues as a married couple," Ashley Goforth said in a statement she issued in September. "It has been a difficult year, but we are thankful for the grace and compassion of a loving God. It has sustained us."

He pleaded not guilty.

In preparing for the case, defense attorneys asked the sheriff's office for the recording of the initial interview with Goforth's wife, and were told it was missing, Cessna said.

The sheriff's office said the officer who recorded the interview on a digital recorder didn't upload it to a computer, Cessna said.

The sheriff's office said the officer later left for another job and hasn't been able to find the device he used to record the interview, Cessna said.

"All we know is that it was in the possession of the sheriff's department and it hasn't been provided to us," Cessna said.

Defense attorneys said the absence of the tape deprives Goforth of potentially valuable evidence. It could be used to raise questions about the investigation, their motion said.

One goal of the hearing will be to figure out why that happened. One element of whether the defense will get the missing-evidence instruction it has requested will be whether the sheriff's office acted in bad faith in the loss of the tape.

However, Steele, the prosecutor, said he has not seen anything to indicate the sheriff's office deliberately did anything wrong, including intentionally getting rid of the recording.

With digital recordings, there is no longer a physical tape to hold onto, Steele said. The recording at issue might be stored in an incorrect folder on a computer, he said, or may have accidentally been erased.

Root "is as upset about this as anyone," Steele said.

Steele said the sheriff's office is still looking for the tape

Steele said he could not discuss the evidence in Goforth's case specifically.

Generally, however, if a piece of evidence isn't available, prosecutors can present other evidence such as testimony from police or other witnesses, medical reports and 9-1-1 calls, he said.

Steele said the case against Goforth will go forward even if the recording isn't available.

Goforth lost a primary bid for governor against incumbent Matt Bevin in 2019 but easily won reelection to the state House last November while under indictment.

Citizens recently initiated a petition to impeach him over the pending criminal charges.

Tweet
How do you feel about this post?
Happy (0)
Love (0)
Surprised (0)
Sad (0)
Angry (0)
Tags:
missinjg evidence key evidence
California Police Department hit with misconduct a...
Former Harrison County Sheriff Deputy charged with...
Comment for this post has been locked by admin.