O'Sullivan estimates that some items date to the 1950s or '60s. He's recently been asked to find items from the 1970s that relate to the Golden State Killer case. 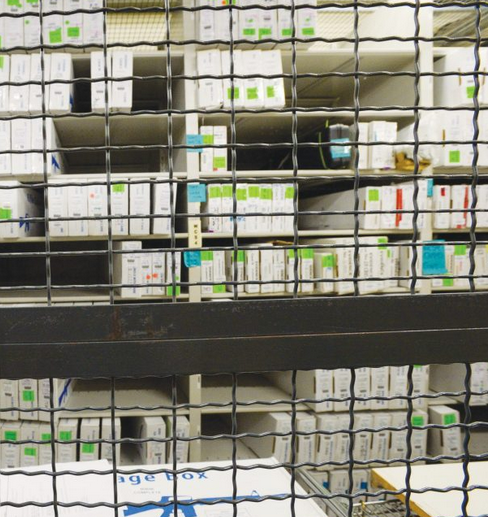 A surfboard propped up in a corner of the Ventura County Sheriff's Office property room nearly touches the ceiling. It's wedged in among shelves full of objects as varied as tree limbs and expensive watches.

The surfboard is one of tens of thousands of pieces of evidence and lost property that Detective Sgt. Pete O'Sullivan, three inventory management assistants and four sheriff's service technicians are responsible for at the facility in Ventura.

Several employees at the Thousand Oaks Police Station have the same task, and there's another storage warehouse for large items on Todd Road in Santa Paula.

The employees ensure the property is preserved until a case is closed, and sometimes that can take a while. Some items, such as those involved in murder or manslaughter cases, might be kept for decades as potential evidence.

O'Sullivan estimates that some items date to the 1950s or '60s. He's recently been asked to find items from the 1970s that relate to the Golden State Killer case.

"We have cold case homicides that get solved periodically. I know there have been a couple in the past five, six, seven years," he said.

To ensure the evidence is still usable, items that may contain DNA evidence are stored in one of three large industrial refrigerators or four walk-in freezers.

Because of the amount of time some evidence will remain in police custody and the value—both in terms of money and as evidence in court—the property room is highly secured, O'Sullivan said, and he is notified immediately if anything is amiss.

Drugs, money and jewelry are stored within a locked vault, and firearms are stored in a secured gun cage.

But space is always an issue, O'Sullivan said, so property room staff regularly audits the inventory to see what can be returned or sold at auction.

"Everything is important to somebody," he said.

Not everything is returnable. Some items—including most of the drugs and all guns—will be destroyed, O'Sullivan said.

But some property is returned if someone can prove it is theirs when police are done with it.

To do so, the sheriff's office uses police reports, pictures or any other proof that can be produced.

"We're kind of relying on the victims, so hopefully they've given us a really good description of what was taken in the first place so we can identify it. . . . If we can't, then, unfortunately, sometimes we'll have to send that stuff to auction," O'Sullivan said.

Christopher Ramirez, manager of mail services for the county general services agency, said the county auctions items from the property room once or twice a year.

Ramirez said about $12,000 in property from the room is auctioned on the website publicsurplus.com each year, which is a small percentage of the $900,000 to $1 million in surplus county property sold on the website annually.

Though the amount is small and most items sell for less than $25, Ramirez said, he's seen some interesting items go through, such as diamonds, pearls and a PlayStation 2. He encourages everyone to take a look at what the county offers.

"The more people who want to go on there and bid on stuff, the better," he said.

But ideally, the auction process can be avoided and property can go back to its rightful owners or their family, O'Sullivan said.

Most of the property room's items are replaceable, but sometimes bags and wallets contain notes to family members that may be the final goodbye a loved one can send. Returning items like those is what the job's all about, O'Sullivan said.

"You just never know what you're getting in here or how important it is to somebody else."