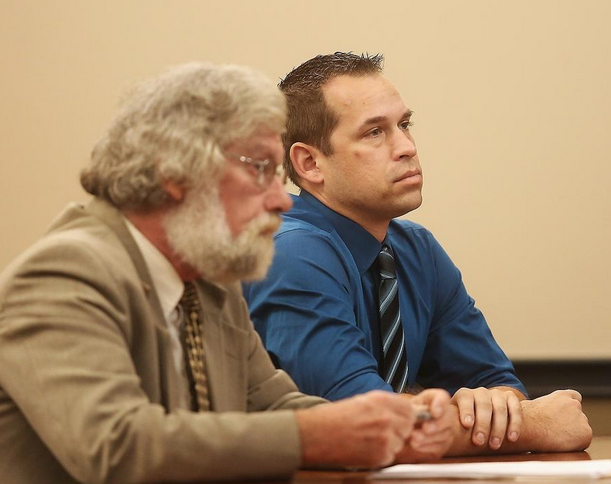 "I was shocked and disappointed to learn of this. But this behavior cannot be tolerated. We took swift and direct action, and I commend BCI for their swift response and assistance in the investigation." — Sugarcreek Police Chief Kevin Kaser

NEW PHILADELPHIA The case of a Sugarcreek police officer charged with stealing drugs from the State Highway Patrol has been sent to Tuscarawas County Common Pleas Court for consideration by the grand jury.

David M. Strubel, 32, of Bolivar, waived his right to a preliminary hearing on the evidence against him in New Philadelphia Municipal Court on Thursday.

The charge carries a maximum sentence of 18 months in prison.

Police Chief Kevin Kaser said the crime was discovered at approximately 11 p.m. Sept. 27, when police saw video showing that earlier in the day, Strubel went into locked areas he was not supposed to enter.

"An inventory revealed theft in office," Kaser said in a press release. "The following morning, I contacted the Ohio Bureau of Criminal Investigations (BCI), and they immediately dispatched several special agents to handle the criminal investigation."

Strubel was interviewed by BCI special agents, and afterwards, was arrested for felony theft, Kaser said.

"I was shocked and disappointed to learn of this," Kaser said. "But this behavior cannot be tolerated. We took swift and direct action, and I commend BCI for their swift response and assistance in the investigation."

Strubel was suspended without pay as of Sept. 28, pending review of Mayor Clayton Weller's decision to terminate, Kaser said. Strubel was hired Aug. 22, 2017.

Strubel appeared by video for an arraignment on Monday in municipal court, where he was released on his own recognizance.

On Thursday, Municipal Judge Nanette DeGarmo VonAllman continued terms of his release: no consumption of alcohol or drugs of abuse; no use or transportation of firearms or other weapons, and participation in pretrial supervision.

"I was shocked and disappointed to learn of this. But this behavior cannot be tolerated. We took swift and direct action, and I commend BCI for their swift response and assistance in the investigation." — Sugarcreek Police Chief Kevin Kaser
https://www.timesreporter.com/news/20181004/sugarcreek-police-officer-david-strubel-charged-with-stealing-drugs
Tweet
How do you feel about this post?
Happy (0)
Love (0)
Surprised (0)
Sad (0)
Angry (0)
Ex-Edcouch cop accused in elaborate drug heist get...
AG finds 5,000-plus untested sexual assault eviden...
Comment for this post has been locked by admin.