The Evidence In The Vaults Below The Courthouse

The oldest evidence Nicks keeps is from a murder case back in the 1970s. 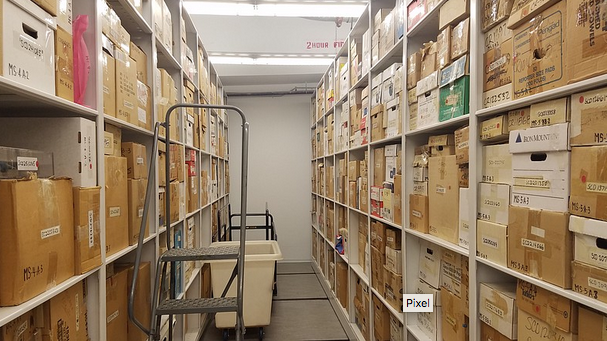 As you enter the San Diego Superior Court's evidence storage vaults, the sound that greets you is rushing water. Like a spa, or a relaxing fountain. Except this water runs through a pipe overhead labeled sanitary waste.

"It's funny until you have to work under it all the time," said Bill Nicks, who has run evidence storage for San Diego County for 30 years.

He's worked down in the basement of the old courthouse, and now the new one, cataloging and storing every piece of evidence that's used in the courtrooms above.

He explained how he stores the thousands and thousands of pieces of evidence from all the county's criminal cases.

How is evidence stored?

"When new exhibits are brought in, they're brought in to this open area here," Nicks said, pointing to a counter stacked with manila envelopes.

"This is what a new case will look like if it's just paper," he said.

Cases with larger pieces of evidence also get boxes for storage, and the envelope lists what's in the boxes and where those boxes are kept.

Nicks is a librarian, sort of. His card catalog system tells you where exactly each piece of evidence is and who's looked at it. And that's very important — if something goes missing, he'll know who to blame.

"The envelope is the brain of the case basically," he said.

What kinds of evidence do they have?

In other ways, Nicks is nothing like a librarian. For one thing, a lot of what he's storing are guns.

"We keep all of our firearms in boxes," he said. "They're all separated by case number. All the red dots are murder cases."

Then there are bigger guns, like a giant assault rifle in a plexiglass case that's almost as tall as Nicks is. He also pointed out other murder weapons, including a few shovels, rakes, a mop and some hockey sticks.

"I first started working here when I was 20 years old and it messes with your mortality a bit, because you see so much death around you, pictures of it," Nicks said. "But then it wears off."

Nicks also has a few ghost stories from the old courthouse on Broadway.

"It was a little spooky over there," he said. "We had what was called a D vault, and we stored nothing but murder death penalties over there. There were a lot of ugly things in there. And I had a cart, a green cart that was very heavy. I was outside and it was inside, and it rolled right out that door on its own, over that threshold and into this room and there's no way it did that without a shove, there's just no way it could happen."

How long do they store evidence?

The oldest evidence Nicks keeps is from a murder case back in the 1970s.

That's another way Nicks is not like a librarian. His purpose is not to hold on to all evidence forever, just as long as it might be needed in court.

"We're responsible for maintaining and managing the exhibits all the way through the appellate process," said Michael Roddy, the executive officer for the San Diego Superior Court.

"There's always a concern that years and years later somebody maybe is exonerated if they're wrongly convicted, and of course the evidence could be important in that," he said. "So we wait until a case is fully completed and then we even wait longer than that. We don't do it the exact minute we can get rid of things."

Death penalty cases are kept until the person is executed or dies naturally. Murder cases are also kept a long time because there can be lengthy appeals. San Diego Superior Court stores about 30,000 exhibits and 2/5 of them are from murder cases.

The court also notifies all parties in the case before anything is destroyed, in case they want to reclaim evidence or ask that it be kept longer. But this can create a demand for space in the storage vaults.

Will they run out of room?

"You've got to keep some things going out the back door because you've constantly got things coming in the front door," Roddy said.

To help free up space, they've been able to get rid of many of the giant foam boards people used to hold up in court, storing the images electronically instead. And a lot of evidence is now stored as photographs on DVDs.

But the evidence room supervisor Nicks says that wasn't true in the past. He's stored some very large items.

"We had two bank robbers and we admitted all of their tools as evidence, they were huge drills and saws, and they were ungodly heavy," he said. "We had a mock room that was made up of board, car fenders, car doors, armchairs, full-size television sets, big screens. They could bring anything. We're lucky they didn't bring anything bigger, because they would have."

Where does evidence go when the case is over?

The last part of the evidence storage process is destruction.

"The Sheriff's office would get handguns, the DEA gets narcotics and ammunition," Nicks said.

But some things aren't destroyed. They're reused. Scales taken as evidence in drug cases used to be sold at auctions.

"But then the bad people were buying them back, so now we donate them to local schools," Nicks said. "Much better purpose I think."

The Evidence In The Vaults Below The Courthouse | KPBS

San Diego Superior Court stores about 30,000 exhibits and two-fifths of them are from murder cases. All evidence has to be stored until a case's appeals process is complete.
https://www.kpbs.org/news/2019/may/03/vaults-below-san-diegos-courthouse-where-evidence-/
Tweet
Tags:
West Coast evidence room
×
Stay Informed