The Montana Department of Justice is working to find storage and test nearly 1,400 rape kits.

The MSU Voice Center wanted to get the word out that although there is a
backlog of rape kits, action is being taken to resolve the issue 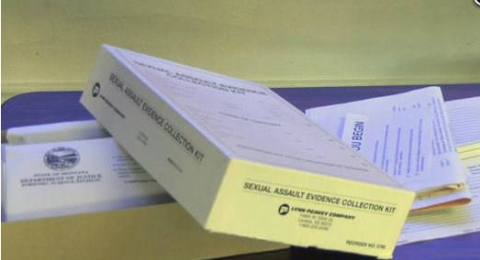 BOZEMAN - Wednesday at Montana State University, the Voice Center presented the efforts being made across the state to end the rape kit backlog.The MSU Voice Center wanted to get the word out that although there is a backlog of rape kits, action is being taken to resolve the issue."Montana does care, we recognize that this is an issue, it's an issue across the country. " said Director of the Voice Center Alanna Sherstead.

As Sherstead just said, the rape kit backlog is not something specific to Montana, there are backlogs all over the country. But, where do all these untested kits come from? Well, many sexual assault victims don't want to move forward with an investigation after evidence is collected. However, the kits are held onto by law enforcement since many victims change their minds.

"We can encourage people to talk to law enforcement but now we can give them that time and space to get some rest and talk to the people that care about them." Said Katy Ostherloth, a Sexual Assault Nurse Examiner.The Forensic Rape Examination Payment Program can hold an untested rape kit for up to a year. This gives victims to decide if they want to move forward with an investigation.

A grant from the National Sexual Assault Kit Initiative will pay for the majority of the backlogged rape kits to be tested. And there is indication that past cases could get some closure."Cities and states across the country that have already started testing their historical rape kits have been able to solve several crimes. because they have been able to identify serial rapists or serial perpetrators." Said Sherstead.

The Sexual Assault evidence Task Force will be working to make sure that survivors have all the tools needed once their rape kit is tested. For more information on the rape kit testing click here.

The Montana Department of Justice is working to find storage and - KBZK.com | Continuous News | Bozeman, Montana

Wednesday at Montana State University, the Voice Center presented the efforts being made across the state to end the rape kit backlog. The MSU Voice Center wanted to get the word out that although...
http://www.kbzk.com/story/35081479/the-montana-department-of-justice-is-working-to-find-storage-and-test-nearly-1400-rape-kits
Tweet
How do you feel about this post?
Happy (0)
Love (0)
Surprised (0)
Sad (0)
Angry (0)
Tags:
altered evidence assault  kits Chain of Custody Big Three: West Coast
Man charged with 1998 killing of 13-year-old girl ...
2004 Paralympic Rings Recovered By PropertyRoom.co...