7,044: total weapons melted 23:
years melting guns at Gerdau Steel Mill in Rancho Cucamonga 3,000 degrees it takes to melt a weapon150 pounds of scrap metal mixed in with the weapons 5 tons of rebar created 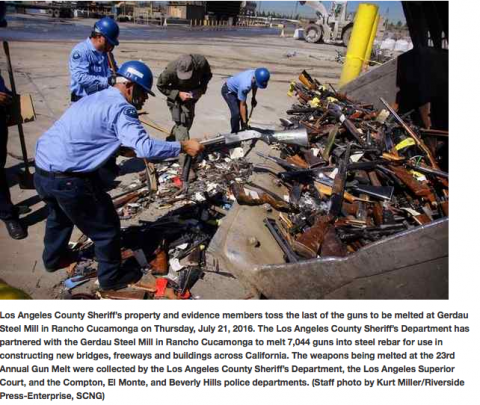 "For the second year in a row, I have the privilege of overseeing our annual gun destruction event," McDonnell said. "Today, more than 7,000 firearms will be translated from their potential of destruction into the certainty of construction."

The number included weapons confiscated by or turned in to the Beverly Hills and El Monte police departments, as well firearms no longer needed as evidence in Los Angeles Superior Court cases.

"Every gun, every rifle, every semi-automatic weapon that you see behind me will not fall into the hands of a mentally unstable person, a criminal on our streets or anyone else who may wish to do us harm," said U.S. Rep. Norma Torres, D-Pomona, who attended the event.

Gerdau Steel Mill donates its furnace, equipment and employees to convert the weapons into steel rebar for use in local highways and bridges.

California has the second highest demand for rebar in the nation, according to Kimberly Selph, a Gerdau spokeswoman.

With this year's gun melt, the Los Angeles County Sheriff's Department and Gerdau will have destroyed more than 180,000 firearms over the past 23 years, according to a sheriff's news release.