Where do seized guns go to die? Chesterfield company harvests parts, grinds up the rest

The process keeps weapons from building up inside evidence rooms in police departments, 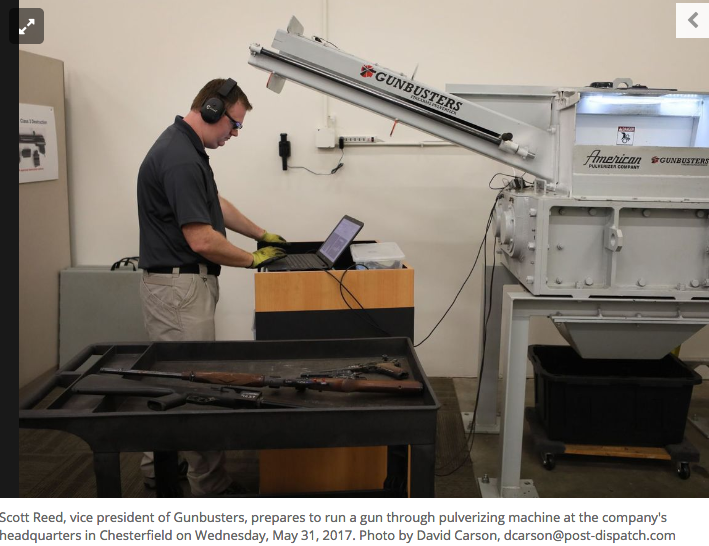 The remote headquarters of a Chesterfield company is where guns seized by police go to die — but, before they do, some of them give new life to others.

Their first stop en route to a glorified paper shredder capable of crushing metal with ease is the desk of John Bozarth, the former armorer for St. Louis County police. He disassembles guns, removing valuable components to be sold mostly online, and sends the remainder of the weapons on to the pulverizing machine.

Sometimes, all that remains for destruction is the frame of a gun, which contains its serial number.

Bozarth and his co-workers wear heavy duty ear protectors for most of their day. The sound of guns passing through the metal teeth of the pulverizer and coming out in pieces on the other end loudly echo throughout the company, appropriately named Gunbusters.

The process keeps weapons from building up inside evidence rooms in police departments, where workers usually don't have accounting or warehousing backgrounds, and record keeping can be inconsistent, said Joe Latta, of the International Association for Property and Evidence Inc. It trains officers on how to better manage seized property.

A video camera mounted inside the machine records each gun's demise, matching serial numbers to a digital file to document and record its destruction for the police departments Gunbusters serves.

In return for the dozens, sometimes hundreds, of guns that departments give Gunbusters to destroy, they get a DVD of their destruction should any question ever arise about them. The company also has destroyed electronic components, such as hard drives, badges and license plates.

And it's all free to police departments. The company makes its money from selling salvaged parts and recycling.

The accountability is what has attracted now hundreds of police departments across the country and the federal Bureau of Alcohol, Tobacco, Firearms and Explosives to use the system, said Raymond Reynolds, who founded the company. His son-in-law, Scott Reed, is the vice president.

Reynolds, a retired St. Louis police lieutenant, got the idea after seeing how many guns his former department had to destroy. He visited American Pulverizer in south St. Louis, where workers use an industrial pulverizer to shred cars, bales of wire, spark plugs and other heavy-duty metal objects. He asked them to make a miniature version of their pulverizer. He and Reed have since patented it, and the documenting process.

A pile of scrap metal produced from running firearms through Gunbusters' pulverizer at the company's headquarters in Chesterfield on Wednesday, May 31, 2017. Gunbusters works with police departments to dispose of guns gathered as evidence at crime scenes after the cases have been decided. The machine destroys the guns by pulverizing it into small pieces. Photo by David Carson,

Latta, a retired lieutenant from the Burbank, Calif., police department, said the Gunbusters system reduces the chances of human error in record keeping in police evidence rooms. In some cases, departments have seen guns lost or stolen, even ending up back in the hands of criminals.

But some chiefs don't have a choice when it comes to what to do with their surplus guns.

About a dozen states ban police departments from destroying guns all together. In those communities, police departments must sell their seized guns. That practice has led to controversy among some police chiefs who believe it's counterintuitive to sell guns after officers risked their lives to get them off the streets.

And, even though they sell them to licensed dealers or owners, firearms have sometimes ended up in the wrong hands and are used in crimes again — including attacks on police officers.

In January 2015, two officers were injured when a gunman opened fire in New Hope, Minn., using a shotgun that had earlier been seized and then sold at auction by the Duluth police.

The area's two largest police departments, St. Louis and St. Louis County police, send teams of officers to supervise the destruction of their weapons in smelters.

In St. Louis County, Sgt. Shawn McGuire said, "Our department complies with court orders that say to destroy the weapon. We get to witness the smelter completely destroy each weapon that we bring."

Before using Gunbusters, Lowery said his department sent its seized weapons to a smelter in Granite City. The department would send at least three officers to monitor the destruction, and do appropriate paperwork to document it.

Gunbusters employees pick up the weapons from police departments and transport them to their facility. They do the work and provide documentation to the departments.

"It's a better chain of custody," Lowery said. "We get serial numbers and pictures of them, so it's a much safer way of doing things and gave us more accountability."

Parts salvaged from some of the more rare weapons Gunbusters destroys have gone on to breathe new life into guns that have long sat dormant. One customer from Alaska thanked Reynolds and company for selling him the parts that revived his grandfather's rifle after 34 years.