32 agents were hired as part of an effort to clear the backlog that began in 2013, when the number of people who had been ordered to give up their guns but were never visited by an agent stood at 20,000. 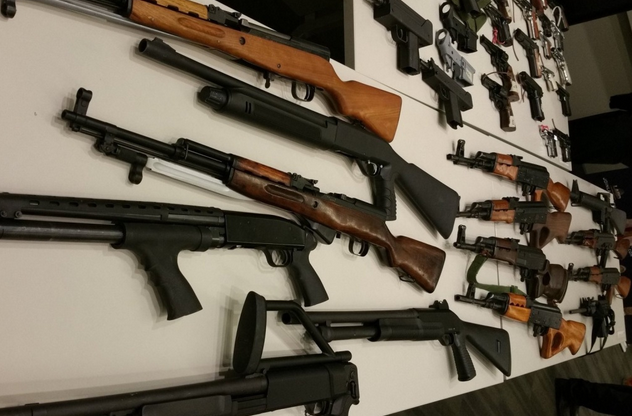 The California Department of Justice believes it will take at least four years to finish the job of seizing guns from more than 10,000 people who have been prohibited from owning a firearm, according to a senior department official.

The timeline can only be met if the state legislature approves funding to convert 12 temporary agents at the department's Bureau of Firearms into permanent employees this year and to do the same for as many as 20 agents next year, according to Yolanda Morrow, an assistant director at the Department of Justice who testified at a legislative hearing Thursday in Sacramento.

The backlog includes people who once legally purchased a handgun or rifle but are no longer legally allowed to own one. This includes people who commit a felony, are the target of a domestic violence restraining order or are found to be severely mentally ill.

The 32 agents were hired as part of an effort to clear the backlog that began in 2013, when the number of people who had been ordered to give up their guns but were never visited by an agent stood at 20,000. That year, the legislature approved $24 million in extra funding to clear the backlog. The program, known as the Armed and Prohibited Persons System, typically gets about $11 million dollars annually.

But as more people were added to the prohibited list, agents were never able to clear the backlog. The department's request for more money now to take care of a problem that was supposed to already be fixed frustrated some lawmakers.

"It's astounding we spent so much money, so much effort and we have so little to show for it," Senator Joel Anderson (R-San Diego) said during Thursday's hearing of the Senate Budget Subcommittee on Corrections, Public Safety and the Judiciary. "These are people who are dangerous to our society."

Attorney General Xavier Becerra said in an interview that it can take a lot of time to seize guns from people on the list. There are other reasons for the backlog, he said.

In 2014 the state also started requiring people to register not just handguns and assault style rifles but all of their long rifles – and that added to the list of people owning guns who aren't supposed to, Becerra said.

The number of guns sold in California also quadrupled that year amid fears the Sandy Hook shooting would bring a crackdown on guns, which added more people to the backlog, he said.

Becerra defended the minimum four-year timeline for clearing the backlog, saying confiscating a gun from a felon or a mentally ill person can be risky business and shouldn't be rushed.

"You can't just check boxes and say we are going to get this done by a certain year at a certain pace," he said.

"From a public safety perspective, this should be his number one goal," Assemblywoman Melissa Melendez (R-Lake Elsinore) told KPCC, "rather than spend the majority of his time thinking up lawsuits to bring against the federal government."

Becerra - appointed by Brown in Jan. 2017 to replace Sen. Kamala Harris and now seeking election to the post - has filed 24 lawsuits on 17 subjects challenging the Trump Administration's policies on immigration, healthcare and the transgender military ban. He has defended them as important to protecting the rights and interests of Californians.

Becerra called clearing the gun seizure backlog "a priority," but Melendez is unconvinced.

"He is not taking his real job of getting guns out of the hands of dangerous people seriously by getting involved in these lawsuits," she said.

Melendez has submitted a $25 million budget request to clear the backlog that includes a caveat: if Becerra doesn't make "meaningful progress" after one year, the funding would go to local police departments.

Prohibited gun owners by the numbers - 2017

Some prohibited gun owners have a lot of guns

Department of Justice officials say prohibited gun owner come in all shapes and sizes. Some have one gun they purchased a long time ago but are no longer allowed to have because they recently committed a non-violent felony. Others are found with large caches of weapons.

In February, agents seized 28 guns and 66,000 rounds of ammunition from Steve Ponder, who landed on the prohibited list due to two prior convictions for counterfeiting money and possessing a machine gun, according to the Department of Justice.

Twelve of the firearms were assault-style weapons; 13 were AR-15 style rifles, similar to the gun used in the recent Florida mass shooting, and 11 were ghost guns - firearms built by an individual and thus untraceable by law enforcement, according to the DOJ.

California is the first and only state in the nation to establish an automated system for tracking firearm owners who might fall into a prohibited status. Since the Armed and Prohibited Persons System program was established in 2006, the state has removed 18,000 firearms from individuals prohibited from possessing them.

Thursday's hearing came just days after the LAPD for the first time cleared a backlog of people living in L.A. who are on the prohibited list. Mayor Eric Garcetti made the announcement in his state of the city address Monday.

"In just the last few weeks, our officers seized 78 firearms from people who are no longer allowed to have them — felons, people with a history of domestic violence or severe mental health issues," Garcetti said. "And I'm pleased to announce that, last Wednesday, our officers brought the list of prohibited gun owners in Los Angeles down to zero."

Four years ago, the L.A. list had a backlog of 2,500 people, according to Detective Ben Meda of the LAPD's gun unit.

The effort to clear the backlog began in 2012, after the massacre of 20 children and six adults at Sandy Hook elementary school in Newtown, Connecticut. Then in 2014, the department assigned parolee compliance units in each of the LAPD's 21 divisions to help clear the backlogs in their areas, buttressing the work of the 15-member gun unit, which has other responsibilities, Meda said.

Each month, 40 to 50 new names are added to the prohibited list in L.A. Meda said the goal now is to take those individuals' guns as quickly as possible to avoid a new backlog.

People have moved, aren't home or won't let officers inside to search for the gun, Meda explained. That means they need to obtain a search warrant. Some people claim they gave the gun to a relative or sold it, he said.

Detectives – whether they're with the LAPD or the state's Bureau of Guns – must verify that before removing someone from the list.

The LAPD continues to find most prohibited gun owners still have their guns, but more and more have sold them by the time officers come knocking. Meda believes people know the department is now coming for their guns and sell them before they're forced to hand them over.

"Word has gotten out," he said.

But as a big department with a lot of resources, the LAPD may be an anomaly. The Department of Justice would not provide a city and county breakdown of the backlog in the rest of the state.