We know that approximately $145,000 in money, drugs, seven guns, and power tools were stolen 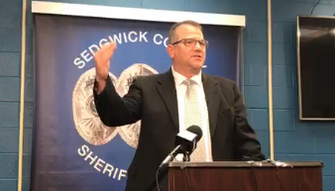 SEDGWICK COUNTY —The Sedgwick County Sheriff's Office is the victim of an internal theft at their Property and Evidence storage site, according to Sheriff Jeff Easter. An ongoing criminal investigation was initiated and began on February 26.

On January 24, 2020, an administrative investigation was initiated on a Property and Evidence Technician. The employee was being investigated for not following proper procedures and policy violations. The employee was then suspended from work on February 3.

While conducting our internal audit, evidence was found to be missing. During the audit it was discovered that items set for destruction were missing. The time line stretches of effected cases goes back several years. Several investigative techniques have been utilized during the course of this investigation to give the Sheriff's Office the best evidence to present for charging with the District Attorney's Office.

Since February 26th, the sheriff's office has been trying to identify any and all evidence that has been stolen and auditing evidence that is still in storeage. During this same time frame the criminal investigation has been progressing. Over 50,000 pieces of evidence are stored in Property and Evidence, according to Easter.

"Currently, we know that approximately $145,000 in money, drugs, seven guns, and power tools were stolen." One of the stolen guns has been recovered, according to Easter.

Two employees with former Property and Evidence experience are now serving in that capacity again. These employees started a complete audit of evidence. Independent of that audit, the Sheriff's Office contracted with an outside firm to audit P&E. This audit will continue until all of the current property in evidence is accounted for and all missing property is documented