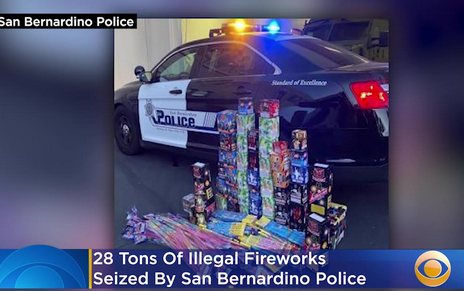 SAN BERNARDINO (CBSLA) — More than 28 tons of illegal fireworks were seized by San Bernardino police and county fire officials in the weeks leading up to the Fourth of July.

The task force also issued 245 citations resulting in $306,250 in fines. Fines were as high as $1,250 for the first offense with the possibility of arrest.

The seized fireworks were turned over to the State Fire Marshal's Office for destruction.

San Bernardino police say an increase in staffing between June 18 and July 5 primarily to focus on fireworks calls resulted in the seizure of more than eight tons of fireworks, 24 felony arrests, the removal of six illegal firearms and more than 50 pounds of illegal narcotics found.

Additionally, out of the 1,634 reports of illegal fireworks, officers issued 164 citations which carried increased penalties that were approved earlier this year by San Bernardino officials.

On the Fourth of July alone, dispatchers took 346 reports of fireworks. Police say the seized fireworks were taken to San Bernardino County Fire for proper disposal.

More than 28 tons of illegal fireworks were seized by San Bernardino police and county fire officials in the weeks leading up to the Fourth of July.
https://losangeles.cbslocal.com/2020/07/08/28-tons-illegal-fireworks-seized-san-bernardino-police-county-fire/
Tweet
How do you feel about this post?
Happy (0)
Love (0)
Surprised (0)
Sad (0)
Angry (0)
Tags:
West Coast
Former mayor of Achille headed to prison this week
Virginia eliminates huge backlog of untested rape ...