A Guide to Fentanyl Touch Overdoses, Which Do Not Exist 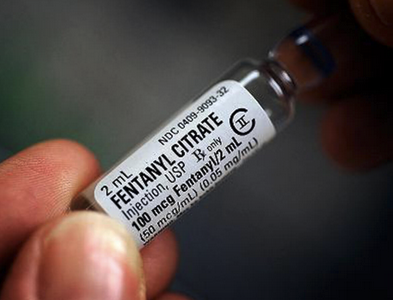 Once as a paramedic student, I accidentally sprayed fentanyl in my face. It was my first time administering the medication, and a patient with a broken ankle was lying on the gurney in front of me, tensed uncomfortably, when the ambulance hit a curb. My thumb was hovering over the syringe's plunger. I stumbled. The fentanyl squirted out, streamed through the air and splattered onto my cheek.

The patient got a laugh out of this, as did my trainers. This wasn't cruel of them; I was fine. I didn't feel any effects at all.

This makes sense, because fentanyl can't absorb through the skin very well. (There are fentanyl skin patches prescribed for pain, especially among cancer patients, which work very slowly and use additives to help the fentanyl absorb, but they're in no way analogous to either liquid injectable fentanyl or powdered illicit fentanyl.) But month after month, we see headlines recounting police encounters with fentanyl that lead to—as the police tell it—sudden, dramatic, near-fatal overdose, often requiring multiple doses of naloxone.

Deputy David Faiivae of the San Diego County Sheriff's Department recently had one such experience, according to a widely circulated video put out by the department. Faiivae had no direct contact with the powder; he was simply standing in its vicinity. Shortly after being warned by his field training officer to stay back from the suspected fentanyl—"Hey dude, too close. You can't get too close to it"—Faiivae fell to the ground. He was given four doses of naloxone, after which he returned to his normal self.

Law enforcement accounts of passive fentanyl "overdoses" have abounded for years. Perhaps the most well-known is that of former East Liverpool, Ohio, patrolman Chris Green, who in 2017 used his bare hand to dust a small amount of powdered fentanyl off his uniform. Somewhere between a few minutes to nearly an hour later (reports vary), he felt that his head was "in a vice grip," his heart as if he'd been "kicked in the chest" and his stomach as if he'd come down with the flu. After being administered a staggering four doses of the nasal spray Narcan—one is almost always enough, and more than two is highly unusual—he was feeling more like himself. Green was terminated from the East Liverpool Police Department earlier this year over numerous complaints of misconduct, including "dishonesty," but none related to the fentanyl incident.

False police reports of secondhand fentanyl overdose are remarkably consistent: After alleged contact through the skin or in the air, an officer feels lightheaded, dizzy, and then faints. Their heart races, they feel sweaty, their chest tightens and their breathing becomes rapid.

These are certainly frightening symptoms. They are not, however, the symptoms of an opioid overdose.

Overdose from an opioid like fentanyl would take the form of loss of consciousness and slow, shallow breathing that eventually stops. There would be tiny pupils, and dusky or bluish skin around the lips and fingernails, depending on the person's skin tone. These were not the symptoms Faiivae displayed. So what exactly is going on here?

Illicit fentanyl cited by police comes from a different source than the fentanyl I accidentally sprayed on myself in the ambulance, but it is still the same molecule. Fentanyl was first used medically in 1968, developed by then-nascent Janssen Pharmaceuticals. Unlike morphine or opium, it is a synthetic opioid, meaning it comes from a laboratory and not from nature. As such, fentanyl is thoroughly studied and well understood, its chemical and physical properties extensively documented for decades.

We know that its chemical properties and arrangement of atoms mean it doesn't pass through our skin without additives to help it along, and even then it takes hours (as anyone who uses fentanyl skin patches can attest). We also know that it's a heavy molecule that doesn't linger in the air and thus does not pose an accidental inhalation risk. Secondhand fentanyl overdose is not a real concern.

The experiences of officers like Faiivae are often most reasonably explained by anxiety, ironically brought on by thepanic stoked around illicit fentanyl by police departments themselves. Police-targeted outlets publish guides on how to safely handle fentanyl that include recommendations for respirators and HAZMAT gear. Fentanyl-resistant gloves are now commonplace and actively marketed to first responders. As officers work in an environment where they're inundated with horror stories of fentanyl taking down colleagues through mere incidental exposure, fear and anxiety build to a fever pitch.

Police culture widely rejects the appearance of weakness and vulnerability, such that responding to anxiety in a constructive way—perhaps by talking to a mental health professional—is widely underutilized and viewed as unacceptable. In a culture that fetishizes mental and physical toughness and abhors vulnerability, fentanyl makes a handy scapegoat for covering anxiety attacks.

This idea that certain bodies are fundamentally tainted was coined the "poisoned-body myth" by sociologist Liz Chiarello. Many of us remember the early days of the HIV epidemic, when panic fomented by lack of information but plentiful homophobia led to rumors that the virus could be spread on public toilet seats, or by hugging. I distinctly remember an elementary school gym teacher, clad in '80s tube socks and short shorts, warning us to never put our fingers in the coin returns of vending machines because people hid HIV-tainted needles in them.

Of course, none of this was true. But those rumors discouraged people from touching or even associating with people living with HIV. Health care professionals routinely refused to care for HIV-diagnosed patients. Bystanders balked at performing CPR when needed, despite the infinitesimal risk of HIV transmission through mouth-to-mouth contact. HIV transmission can still bring felony charges in some US states today.

We repeat that history by spreading false information about fentanyl. We paint drug users as literally, physically toxic to be close to—dangerous to approach or touch, even if they're experiencing an overdose.

In response to the San Diego Sheriff's Department video and its claims, hundreds of health care professionals, first responders, journalists, people who use drugs and public health researchers (including me) signed an open retraction request. It's aimed at news outlets that publish, unchallenged, police accounts of passive fentanyl overdose.

"By speaking with one voice through this letter, we seek to hold reporters, media outlets and law enforcement organizations accountable for spreading dangerous misinformation," University of Texas at Austin Professor Dr. Lucas Hill, one of the letter's authors, told Filter. "Passive fentanyl exposure is not a health risk for overdose responders. It's time to kill this myth for good."

Claire is a paramedic and harm reductionist supporting overdose response programming and research at The University of Texas at Austin College of Pharmacy's PhARM Program. She uses her background in chemistry to study drug supply contamination, and is currently completing graduate work in public health at the London School of Hygiene and Tropical Medicine. She lives in Austin, Texas.

A Guide to Fentanyl Touch Overdoses, Which Do Not Exist

Police accounts of passive fentanyl “overdoses'' have abounded for years, even though it's impossible for secondhand exposure to cause harm.
https://filtermag.org/fentanyl-touch-inhalation-overdose-police-san-diego/
Tweet
How do you feel about this post?
Happy (0)
Love (0)
Surprised (0)
Sad (0)
Angry (0)
Tags:
fentanyl overdose
Dallas murder suspect to be released from jail whi...
Director of DC lab that processes criminal evidenc...
Comment for this post has been locked by admin.