A Happy Ending: Reuniting Missing Property With Its Rightful Owner 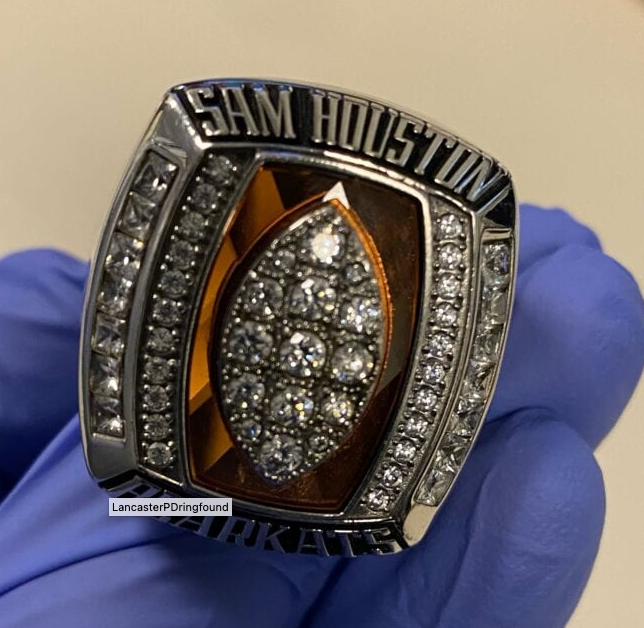 With two people; one a Lieutenant, the other a civilian and, a mound of property that ranges from drugs, to money, to clothes to sometimes, valuable items that could easily get lost in the mix, if a human touch isn't applied then property that could be valuable to an individual might not even be found before procedural destruction.

Recently, that human touch led Lancaster Lt. Michael Fine and Property Room Technician Tamara Grundy to discover a jewel, literally, among a sea of items that had no value.

It was on April 14 that Fine was going through an old case in order to get rid of the property after the case was closed.

"The property, which I believed to be items stolen during burglaries, was no longer needed as evidence," Fine explained.

As he was checking to see if there were any items that could be returned to the rightful owner before disposing, he came across a woman's purse with items still inside.

What was found inside the purse

Inside the purse he found a large college football ring. The ring had Sam Houston and Bearkats embossed on the top with clear stones in the shape of a football.

Fine was also in luck because on the side of the ring was the name "Hicks" with a football helmet. The other side had the year 2012 with the name Steven Hicks inscribed on the inside.

That pretty much told Fine all he needed to know in order to figure out next steps.

"I knew this ring had to have sentimental value for someone and I wanted to return it to them," Fine explained.

He looked up Steven Hicks from the 2012 Sam Houston University Football team roster and sure enough found him. That led him to enough information and a photo to allow him to search and find Hicks on Facebook too.

Grundy got involved in the search too and when Fine told her he thought he found the owner of the ring she was excited.

"Like the men and women in all the departments here at Lancaster PD, those working in the property room take care in doing the best job possible," said Lancaster Police Chief Sam Urbanski. "On occasion, like in the case of our finding this ring and returning it to the owner after roughly three years, we have those feel good days when we know we have made a difference in the life of a stranger."

In search of the owner

Grundy contacted Hicks by way of Facebook and he did not reply.

A call to Sam Houston's Alumni Division led the technician in the right direction and Hicks' mother, Rhonda Gilliam was found and contacted concerning the ring.

When Grundy told her the ring had been found, Gilliam was "ecstatic."

Hicks called a few minutes later and after a brief description of the ring it was determined to be a match.

Hicks told Lancaster Police the ring had been stolen in a car burglary in Mesquite a few years prior and he thought he would never see it again.

"We are all working together," Urbanski concluded.

Tweet
How do you feel about this post?
Happy (0)
Love (0)
Surprised (0)
Sad (0)
Angry (0)
Tags:
MISSING PROPERTY EVIDENCE ROOM
INVESTIGATIVE UNIT: Narcotics officer at center of...
Ex-Chadbourn police chief stole hundreds of pills,...
Comment for this post has been locked by admin.