Under that policy, at least two officers are assigned to be in charge of the box. The second steps in if the first is unavailable. 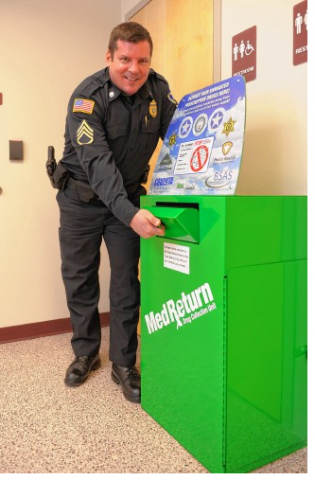 The Northwestern District Attorney's Office decision to suspend pick-up service to the Montague Police Department's medication drop-box and its participation on a regional anti-crime task force appear to hinge on how unspecified department personnel allegedly handled the contents of the Med Box.

So what's the proper protocol?

Chris Geffin, the assistant district attorney who oversees the program at the DA's Office, said drug drop-off boxes have been installed in 24 police departments across Hampshire and Franklin County, and are usually located in the department's lobbies. They're typically overseen by surveillance cameras.

The boxes are usually emptied once every two months by a two-person team of one employee each from the Hampshire County Sheriff's Department and the Franklin County Sheriff's Department, according to Geffin. The departments rotate servicing each county's departments monthly, so pick-ups in Franklin County occur every two months.

During a pick-up, the deputies meet with the department's designated evidence officer and a supervisory officer. Together, they check the contents of the box, according to a document obtained by The Recorder outlining the DA's recommended protocol.

If the box needs to be emptied, the medication is placed in a designated disposal box and sealed, and the evidence officer signs it. The box is weighed, and that is recorded on the seal. The same process is carried out with any extra evidence boxes that have been secured in the evidence room. The boxes are then incinerated at another location.

Between pickups, each department has its own protocol for who can access the box to remove drugs for storage in an evidence locker if the box becomes too full before it is emptied, Geffin said.

The Montague Police Department's new Med Box protocol, established in late June, according to a copy provided to The Recorder, is designed to "ensure the integrity of the process." The new policy was expected to go into effect some time after June 28, the date it was issued.

Selectboard Chairman Richard Kuklewicz told The Recorder that he does not believe there was a "real clear" protocol in place at the department prior to "the one the chief came up with after that date."

Under that policy, at least two officers are assigned to be in charge of the box. The second steps in if the first is unavailable.

When emptying the box, the primary officer now selects a random employee to assist with the process, and the bag containing the drugs is removed and tied off immediately. Then, the knot is taped over with tamper-resistant tape. Neither person is allowed to handle the medications directly.

The bag is sealed in a box, and both are brought immediately to the evidence room. Both the officer and the random employee initial the box.

The protocol also said a master log will be maintained in the evidence room going forward, recording the officer's and employee's names, the time and the date of each emptying of the box.

Those boxes are also collected by the sheriffs' collection team and incinerated.

Anyone can deposit any medication or drug in pill form — from outdated vitamins to cough medicine to narcotics — without removing them from their containers. Liquids, needles and syringes are prohibited from the boxes. The boxes work just like mailboxes, with a heavy metal door that makes it impossible to reach inside. Geffin said they've collected more than 25,000 pounds of discarded medication since the program's launch.