Augusta Police Department to sell 62 guns and destroy 57 it has acquired over the years. 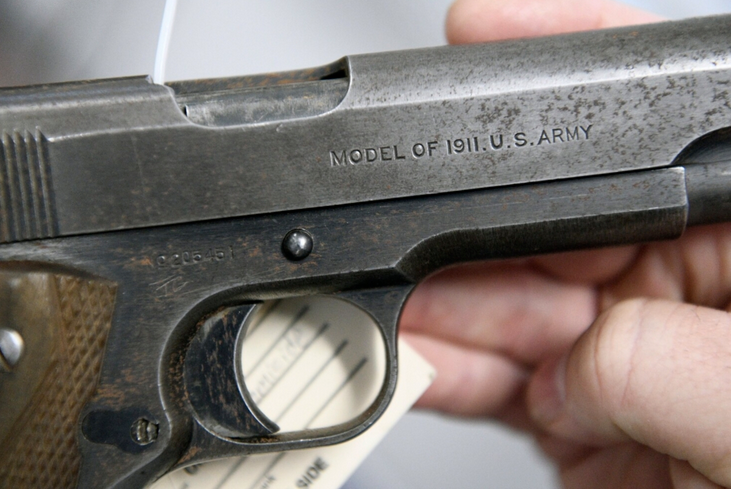 AUGUSTA — The Augusta Police Department plans to sell 62 guns it has acquired over three decades and destroy another 57 that have been involved in crimes or used in suicides.

All but one member of the City Council recently told police Chief Jared Mills to sell the guns that can be sold, instead of destroying all of them. The chief had asked what the city should do with the growing inventory of guns accumulating in storage since the 1990s.

The Police Department has nearly 120 guns it now legally owns in an evidence locker that Mills said is overflowing. They were acquired in various ways — some were seized during crime investigations, others were given to the department by people who wanted to be rid of them and some were found and their owners could not be located.

The guns have languished in storage, and some of them have been in the department's possession so long they were moved in 1998 from the previous police station at the former City Hall to the current, about-to-be-replaced police station on Union Street, because the city had no policy on what to do with them.

Mills said rules for handling evidence indicate a firearm used in a crime or suicide should be destroyed.

"Say we've got a weapon used in a murder," Mills said. "That's not something we can resell. That's not on the table for a decision."

Robert Gregoire, a former Augusta police chief, sought guidance from city councilors several years ago, but councilors were split on what to do with the firearms not involved in crimes, with some wanting to sell them to recoup money for the city, and others wanting to destroy them so they could not be used in future crimes. No action was taken.

Mills wrote a memorandum last week to city councilors explaining that the Police Department's evidence locker, in which the guns are stored, is running out of room. He asked for councilors' guidance on whether the department could sell or destroy the firearms.

Mills, who is also president of the Maine Chiefs of Police Association, said some police agencies destroy guns, while others sell them. He said he did not want to decide what to do with them without consulting with city councilors.

The council discussed the issue and took a straw poll last week, with every member except Ward 1 Councilor Linda Conti indicating the city should sell the guns that can be sold.

Conti, who was on the council years ago when it deadlocked on the same question, was in favor of destroying the guns then, and remains so now.

Other councilors said to sell them, with some, such as Ward 4 Councilor Eric Lind, suggesting the money go toward buying safety equipment, such as bulletproof vests, for the Police Department.

Councilors said the guns should be sold to a "brick-and-mortar" store, not an online operation, which Mills agreed to do.

Some of the guns are likely valuable, while many are not, according to Mills. He said the department has yet to have the guns assessed for value.

Pressed by councilors on how much the guns could be worth, Mills said together, they are likely worth "in the thousands" of dollars.

Mills said now that the Police Department has the guidance it sought from city officials, it knows what to do with other guns that come into its possession: Destroy those used in crimes or suicides, and sell the others.

He said the issue was timely, allowing the department to deal with the growing inventory of guns before a new police station is built.

Augusta Police Department to sell 62 guns and destroy 57 it has acquired over the years.
https://www.centralmaine.com/2022/05/02/augusta-council-gives-police-approval-to-sell-seized-guns-destroy-those-used-in-crimes/