The Sexual Assault Evidence Collection Kit Task Force concluded that there are 6,424 untested kits in the state. 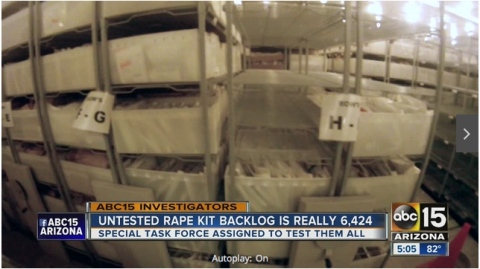 The Sexual Assault Evidence Collection Kit Task Force concluded that there are 6,424 untested kits in the state.

"We think it's an injustice," Ducey said in an interview with ABC15 earlier this year. "These predators are out on the street."

Officials said two indictments have already been made by testing new kits.

Ducey decided to tackle Arizona's rape kit backlog after hearing about it from Senator Katie Hobbs, who has championed the issue for years.

Hobbs first spoke out about Arizona's backlog in a 2012 ABC15 investigation that uncovered more than 3,000 untested kits in the Valley alone.

"We're on our way to testing every evidence kit in the state," said Hobbs in a prepared statement. "As a social worker who has spent the majority of my career working with assault victims, I can personally attest to the importance of making sure we eliminate the backlog of these evidence kits. These recommendations, months of expertise in the making, will go a long way in not only bringing first-time offenders to justice but also shining a light on multiple offenders whose victims will soon get the closure they deserve." A special state task force has found that Arizona law enforcement agencies have more than 6,000 untested rape kits.
http://www.abc15.com/news/local-news/investigations/az-police-departments-have-6000-untested-rape-kits
Tweet
How do you feel about this post?
Happy (0)
Love (0)
Surprised (0)
Sad (0)
Angry (0)
Former CPD narcotics supervisor pleads guilty as p...
Former Berks sheriff's deputy charged with stealin...
Comment for this post has been locked by admin.