Davidson, however, was not leaving without a fight. On Dec. 13, 2016 she sent a letter to Moab's mayor Dave Sakrison notifying him and the city that she was suing them for close to $2 million for firing her because, she alleged, she had "raised her concerns to the Mayor and FBI about wrongful conduct by members of the City's Police Department," 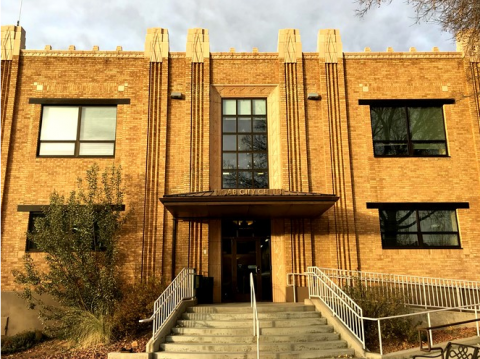 In early December 2016, Moab City announced its plan to close for an unprecedented 10 days over the holidays. The year had been so diabolical for the municipality—which sees millions flood through its streets and businesses each year en route to nearby national parks, rafting and a host of other tourist delights—they just wanted to shut the door on it for good. In the local press and social media, there had been ongoing controversies over employee departures and city manager Rebecca Davidson's administration, while behind-the-scenes multiple investigations into the police department over the prior 18 months had led to five officers—a third of the force—being put on paid administrative leave; three of them subsequently resigning. Davidson herself was put on administrative leave on Sept. 13 and terminated Sept. 30 "without cause," and longtime police chief Mike Navarre abruptly resigned, Sept. 20, clearing out his office overnight.

Davidson, however, was not leaving without a fight. On Dec. 13, 2016 she sent a letter to Moab's mayor Dave Sakrison notifying him and the city that she was suing them for close to $2 million for firing her because, she alleged, she had "raised her concerns to the Mayor and FBI about wrongful conduct by members of the City's Police Department," her attorney Gregory W. Stevens wrote. Conduct she complained about included, "lying while testifying in court; threats against members of the public; drinking alcohol with minors; harassment of witnesses; domestic violence; and issues concerning evidence."

Moab City's interim city manager, David Everitt—former chief of staff under Salt Lake City's prior mayor Ralph Becker—declined to answer emailed questions about why Davidson had been terminated. "The City is likely subject to litigation by Ms. Davidson and we should not comment on that matter," he wrote. City Weekly submitted questions through Everitt to Chief Steve Ross and City Recorder Rachel Stenta. After Everitt consulted with them, he then responded.

Davidson has not publicly discussed her departure from the city or the issues that led to her concerns about the police department before. In several interviews in person in Moab and by phone, she detailed her struggles to support, motivate and modernize the 15-strong police department. But in August and September 2016, she stumbled upon issues, that were "just the tip of the iceberg." What she had discovered initially from reports to her by Grand County attorney Andrew Fitzgerald and some alarmed and angry community members was abusive behavior by officers who were lacking supervision. As she dug deeper into the department, she says she also learned of apparently undocumented donated funds and a lack of oversight of confiscated monies held in the evidence locker.

Davidson started as Moab City's manager in April 2015. She says management oversight at the city was not apparent. "Cities tend to have a matrix organization," says the 11-year veteran city manager. "They are very structured. Not so in Moab. It surprised me, it caught me off guard."

In initial interviews with police employees, she learned of low morale and concerns about lack of defense tactic training. So she doubled the training budget. Changing hiring practices proved more challenging. "If the police chief wanted to hire, he would do it, and Donna [Metzler, the former city manager] would sign off on it." Davidson pushed for a centralized HR department, in part because she was concerned about the caliber of police officers the city was hiring. "This is a police department in crisis, that's the concern," she says. "You can't play with police departments. You need to take it really serious, how they get hired, how they get trained, and make sure we're watching."

She instituted a psychological evaluation and polygraph for potential new hires at the PD, "for the protection of the community and the protection of that particular officer." This became an issue, she says, when Chief Navarre favored a local candidate with no police experience over an out-of-state candidate who had served as a policeman.

Attempts to contact Navarre were unsuccessful. A man answering a cell phone number confirmed as the former chief's by several sources, hung up when a reporter identified himself.

Part of the problem, Davidson felt was that Navarre "was hardly ever in his office, as little as a few days per week, and he did not seem to be supervising his officers very well."

Everitt wrote in response to emailed questions to Ross about his former boss' lack of presence in the department, "As a salaried employee, Chief Navarre worked independently, and he periodically worked from home or remotely. He was nearing retirement, and he transitioned his responsibilities to remaining employees in the Police Department."

When she began to dig deeper into the police department, alarmed by complaints of officer misconduct, her formerly ardent supporters such as Mayor Sakrison "did a 180," she says and either became increasingly critical or gave her the cold shoulder.

At the time she was let go, Davidson had identified several new issues of concern at the police department. One was donations. Davidson says she and Navarre clashed over the latter's plans to send two officers and himself to Nevada to attend the annual Utah Narcotic Officers Association's conference. She only learned of the donations because the city manager has to sign off on out-of-state expenses. Davidson says Navarre claimed to have donations from 35 companies for police training. Since she had doubled their training budget, this rankled, only to grow into a larger concern when she couldn't find the donations on the city's books.

In a response to questions regarding the donations to Ross, Everitt says the city looked at that issue. "Utah Narcotics Association solicits in-kind donations statewide for their conference, and apparently they raffle off those items to raise funds for their Association. These were not donations to the City, so it would not have been documented in the City's accounting system."

Davidson also had concerns with the evidence room in late August 2016, when she learned that a few months before a bank account been opened for money confiscated during arrests. "What concerned me was that somebody told me there were times that the evidence room didn't balance up with the money in there." It struck her as odd that there were no long-standing accounts for such money to be held in.

Moab City confirmed that a non-sworn police employee, Cindy Montague, had suggested "the City set up a bank account to hold all cash evidence that wasn't also potentially trace evidence [meaning that the cash might have fingerprints on it, etc]," Everitt wrote. In response to a question regarding what Utah law required in terms of the documenting and holding of confiscated cash, the department "checked with a couple of long-time evidence custodians in other jurisdictions and they did not know of any state rule of that issue either."

Prior to opening the account, "traditional practice for MPD was to keep cash in a separate safe in the evidence vault," interim city manager Everitt wrote in an email. "It was subject to standard evidence chain of custody protocols and tracked accordingly. MPD used police data management programs Spillman, then Millenium, and now Fatpot over the years to track and maintain records associated with evidence."

Montague had been going into the evidence locker on evenings and weekends on her off-time, apparently alone, Davidson found out when she was reviewing time-cards. Everitt wrote in an email response to questions to Ross that evidence custodian Montague was inventorying and updating the evidence vault. He wrote that she, "like a number of police and other city employees, would sometimes come in on weekends and after hours when there is a chance to work in an uninterrupted environment. This was known and approved by the appropriate supervisors." Her odd hours were to accommodate the work schedule of an officer who was helping her work on the vault.

The last time the evidence room was audited was May-September 2012, Everitt wrote in response to several questions to city recorder Rachel Stenta. Davidson was concerned that money had been coming in and out of the evidence room with "no checks and balances to it." She says she asked for an audit of the locker room at 4 p.m. on Sept. 12—the next day she was put on leave.

On Sept. 30, the council voted to terminate Davidson, council member Heila Ershadi being the lone voice of dissent. "The public does not have all the facts, and frankly, neither does the Moab City Council," she was quoted as saying in The Moab Times Independent.

For more than a decade, Moab PD was an active player in a multi-agency drug task force, involving officers from San Juan County, Carbon County and Emery County. In response to a City Weekly record request seeking a list of all Moab PD drug task force cases, a breakdown of monies confiscated by the task force and a copy of any audit by the city of its evidence room, Moab City provided "the documents that the City has access to," Everitt wrote, which amounted to 31 pages, 20 of them receipts for money to buy drugs or for informants.

A list of forfeitures—seized cash—from drug arrests between 2000 and 2016, totaled just over $38,000. Davidson expresses incredulity at how small the total of seized cash is. In 15 years, she says, "they were only able to do busts to the amount of $38,000? Some people spend that individually on buying drugs. That is nothing."

While Stenta provided 20 receipts in her response to the record request for sporadically logged expenses relating to drug-buys with Moab PD money between 1983 and 1996, there were none since then, despite a high prevalence of drug use, much of it weed. Asked why there was no documentation post-1997, Everitt replied in an email, "Unclear at this time." CW

Tweet
How do you feel about this post?
Happy (0)
Love (0)
Surprised (0)
Sad (0)
Angry (0)
Tags:
West Coast
Was use of drug forfeiture money in Saginaw legal?
Lawyer: Donora cop's heroin use is 'American trage...