"the bloodstains, bed sheets, rape kit and sunglasses have disappeared from the evidence record since the 1980s" 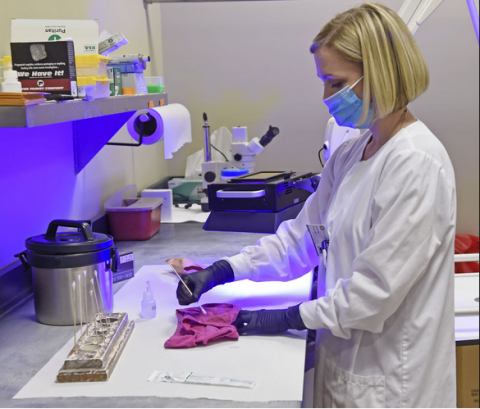 A nonprofit legal aid group is trying to re-open the books on a decades-old East Baton Rouge Parish rape conviction by tracking evidence for DNA testing.

However, the bloodstains, bed sheets, rape kit and sunglasses have disappeared from the evidence record since the 1980s.

East Baton Rouge Parish District Attorney Hillar Moore said he plans to resist any attempts to turn his evidence room over looking for clues his office does not believe are there.

Roy Morgan was convicted and sentenced to life in 1983 for rape of a victim identified only as L.H. In an application for post-conviction relief, attorneys with The Innocence Project New Orleans wrote that Morgan has always denied committing the rape and that "the only direct evidence of his guilt was a single eyewitness identification by the victim."

In 2010, Morgan asked the court to submit various evidence for DNA testing, which wasn't available when his case was first considered by the court.

Specific evidence he wanted tested includes the rapist's sunglasses knocked off in a struggle, blood left at the crime scene from a cut on the assailant's arm, the victim's bed sheets, which could be tested for blood and semen, and the results from a sexual assault kit collected at a hospital.

The 19th Judicial District Court denied Morgan's request because the evidence could not be located for testing, his request states. However, in November, Innocence Project staff were investigating an unrelated case and found misfiled evidence from other investigations jumbled together in the same box, the request states.

Morgan's attorneys made supplemental filing, and earlier this month, the 1st Circuit Court ordered the local court to hold a new hearing to determine "whether the specified items of evidence susceptible to DNA testing still exist."

The two sides disagree over how much digging that will require.

The District Attorney's Office has already "gone the extra mile" by searching the file with the misidentified evidence and found no material related to Morgan's case, prosecutors wrote in a response to the Innocence Project request.

The Innocence Project wants the court to allow it investigators to comb through much more of the District Attorney's storage space.

"Counsel for Roy Morgan requested an expansive exercise of judicial power based on meager evidence. ... There is no factual or legal basis to order the District Attorney to do more than it has already done in regard to this case," they wrote.

"It appears that given the thirty years that have passed since the commission of this crime that the evidence no longer exists, or it can no longer be found."

Innocence Project New Orleans Director Emily Maw fired back, saying it is "indefensible" for prosecutors to claim they looked for Morgan case evidence in the most obvious place but then gave up the search.

She believes the most likely explanation is that the bed sheets, rape kit and other items are still in the district attorney's custody, but somewhere along the line, it was misidentified or improperly inventoried. It's a fairly common problem in old cases, and a more thorough search could set the record straight, Maw said.

"The burden of diligently searching files in furtherance of the district court's investigation is nothing compared to the potential and unimaginable injustice of Mr. Morgan dying in prison for a crime he did not commit simply because an evidence custodian could not be bothered to diligently look within its own storage," attorneys wrote in their application.

Moore said in an interview that it would be ridiculous for the court to allow Innocence Project staff to look through all his storage, briefly alluding to concerns about contamination of evidence. However, he said, he needs to hear Morgan's attorneys' proposal before he can respond more directly.

"I have no idea what they're going to ask," the district attorney said.

Maw said the two sides and the court still have to work out how a search is to be performed and how to handle any evidence that may turn up. She said that any items that may have DNA connected to the Morgan case is "pretty clearly" eligible for genetic testing.

There could be fall-out for the District Attorney's Office if it misplaced evidence.

Maw referenced an Innocence Project case in New York in which a man named Alan Newton was convicted of rape in 1985. He requested a DNA test in 1994 to try to clear his name, according to information on the Innocence Project website.

Prosecutors said the evidence he wanted to test was presumed lost, but during a search 11 years later, the victim's rape kit was found, and DNA from sperm collected after the attack was not a match to Newton.

He sued the District Attorney's Office and won, Maw said.