Allegedly stole about $2,000 from the file of a closed bank robbery case in January while assigned to the Evidence Management Unit 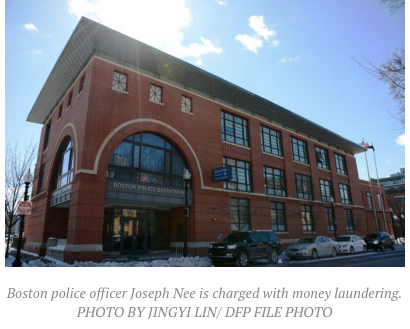 A Boston police officer was indicted on charges of stealing money from the department's evidence room and attempting to launder it at Plainridge Park Casino in Plainville, Massachusetts.

Joseph Nee, 44, who has been with the Boston Police Department since 1998, allegedly stole about $2,000 from the file of a closed bank robbery case in January while assigned to the Evidence Management Unit in Hyde Park, according to a press release from Attorney General Maura Healey's office.

The stolen money was identified by red marks left over from an anti-theft dye pack which discharged during the robbery, according to the release. Nee attempted to use some stolen money in the slot machines at the casino, and then allegedly redeemed the stolen money at a kiosk for cash which was not tainted with red dye.

Nee will be arraigned on charges of larceny and money laundering at the Suffolk Superior Court on Oct. 30, according to the release.

The Massachusetts Gaming Commission said in a statement emailed to The Daily Free Press they have worked closely with the BPD and the attorney general's office on this issue.

"Let the message be clear that Massachusetts will have zero tolerance for activity that compromises the integrity of the state's gaming industry, which includes attempts to disguise illegal cash as gambling winnings," according to the statement.

Daniel Medwed, a law and criminal justice professor at Northeastern University, said there is a greater potential for conflicts of interest when a case involves law enforcement officials. He said that when a crime occurs within Suffolk County, BPD will usually investigate the situation and then send it over to the Suffolk County district attorney. However, if BPD is involved in the crime, that can be "worrisome" if BPD looked into it.

David Rossman, a law professor at Boston University, wrote in an email it could be difficult for prosecutors to receive cooperation.

"Prosecutors have to anticipate difficulty in getting the police agency for which the officer works to cooperate fully," Rossman wrote.

Lack of resources and supervision could play a role in law enforcement fraud, Medwed said. He went on to say that sometimes people given oversight in evidence rooms are given too much autonomy. Medwed gave suggestions as to how these problems could be solved, which included more oversight, checks and balances and semi-regular audits.

"If the money was taken in January and we don't find out about it until August or whenever this first broke, that's a problem in a lot of ways," Medwed said. "So more frequent audits and surprise audits where independent investigators maybe at the state level come in and do inventory of the property room to make sure everything is there."

Medwed also said the majority of law enforcement officials do their jobs to the best of their ability but with any group of people, there are a certain number who might engage in criminal activity.

"Part of it is with power comes responsibility and police officers have tremendous power," Medwed said. "We should hold them up to a high level of responsibility."

Several Boston residents look down on police corruption and that it's important issues like this come to light.

Michael Bottomley, 26, of Jamaica Plain, said this injures the trust people put in the police.

"We trust these police officers to have some sort of responsibility to uphold and to do something like that would be totally wrong," Bottomley said.

Jon Hay, 33, of Brighton, said this is so common that he has an indifferent reaction to the news.

"There's a lot of things happening now with police officers so my reaction to that is 'stole a couple thousand dollars?'" Hay said.

"Police corruption is a huge issue which is only now being brought to light due to video sharing sites like YouTube and streaming services such as Facebook Live" Carson said.