California may soon eliminate the statute of limitations for rape charges

California has become the latest battleground in a nationwide push to
relax or eliminate the statutes of limitations on sexual-assault crimes,
recently passing a bill that would make it the 17th state to allow rape victims to pursue charges at any point after an
attack. Gov. Jerry Brown must approve or veto the measure by month's
end. 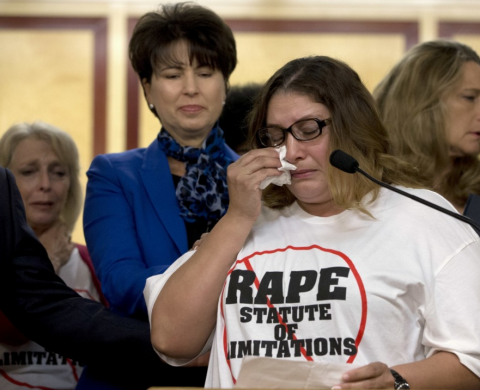 California has become the latest battleground in a nationwide push to relax or eliminate the statutes of limitations on sexual-assault crimes, recently passing a bill that would make it the 17th state to allow rape victims to pursue charges at any point after an attack. Gov. Jerry Brown must approve or veto the measure by month's end.

"People are starting to realize rape is a serious crime," Leyva said in an interview with The Washington Post. "It does not happen by accident. It's a conscious decision by a rapist. The victim should always have the opportunity to come forward."

The debate over how much time accusers should have to report rape recently turned high-profile in California, where several of Bill Cosby's accusers say he drugged and sexually assaulted them years and even decades ago.

Nearly three dozen states and the District of Columbia have statutes of limitations on filing sexual-assault charges. Length and circumstance vary by location. Victims in Minnesota, for example, must pursue charges within three years. The reporting window in Louisiana, meanwhile, stretches three decades. Twenty-seven states will extend or suspend time frames if DNA evidence links a suspect to an attack.

Some lawmakers argue that statutes of limitations arbitrarily cut off victims, who sometimes take years to process an attack or work up the courage to come forward. Others say that opening the door for decades-old accusations could encourage false reports with flimsy evidence. The existing law, they note, already makes exceptions for new DNA matches.

"The statute of limitations is there for a reason," Natasha Minsker, director of the ACLU of California Center for Advocacy and Policy, told the Los Angeles Times. "When a case is prosecuted literally decades after the event, it becomes much more ... difficult to prove that you are wrongfully accused."

Though activists have long argued justice shouldn't be time-sensitive, the avalanche of accusations against Bill Cosby in 2014 re-energized efforts to abolish or relax state deadlines. Last year, Indiana closed a loophole that, in one case, allowed a confessed rapist to avoid punishment. "Jenny's Law" enables prosecutors to file charges after the state's five-year limit if new evidence comes to light. Florida also updated its law in 2015, expanding the deadline from four to eight years. Nevada followed, expanding the limit from four to 20 years.

In January, Oregon doubled its window from six years to 12 years. Momentum continues to build across the country, with Illinois Attorney General Lisa Madigan pushing for the state to eliminate the statute of limitations for felony sexual assault.

Pennsylvania, where Cosby faces sexual assault charges, has a 12-year window. Andrea Constand, a former basketball coach at his alma mater, Temple University, has accused him of drugging and then assaulting her in 2004. On Tuesday, a Pennsylvania county court judge set Cosby's trial date for June 5.

At least 58 women have leveled accusations against the entertainer, once known as "America's dad" for his wholesome role on top-rated "Cosby Show."