Like most police agencies across the country, the department found itself with a large backlog of untested kits, "as best practices and the
department's policies for testing sexual assault evidence evolved," the city of Charlotte said this week in announcing the planned near-elimination of backlogged kits. 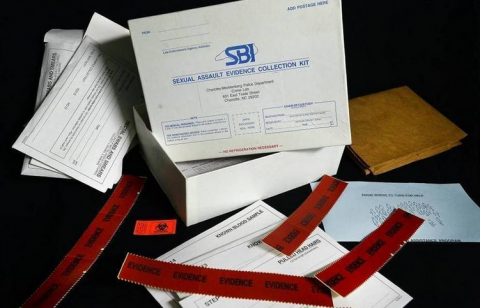 The Charlotte-Mecklenburg Police Department expects to nearly eliminate its backlog of untested rape kits by this summer.

Like most police agencies across the country, the department found itself with a large backlog of untested kits, "as best practices and the department's policies for testing sexual assault evidence evolved," the city of Charlotte said this week in announcing the planned near-elimination of backlogged kits.

Previously, CMPD prioritized testing of sexual assault evidence kits based on the need in each particular investigation, said Lt. Melanie Peacock, who heads CMPD's sexual assault unit. The department didn't have the resources to test every kit collected, she said, so it didn't test kits when the sexual contact was not in question or when either the victim or prosecutor declined to move forward with the case.

From 2000 through May 2016, Charlotte-Mecklenburg Police destroyed the results of sexual assault exams – commonly called rape kits – in about 1,000 cases, including alleged crimes against children, according to department records obtained by the Observer.

An expert who has studied sexual assault investigations for the U.S. Department of Justice said she had never heard of that many rape kits intentionally destroyed by a police department.

CMPD Lt. David Robinson said at the time that the department's actions would not stand up to today's best practices. But he said that CMPD's handling of rape kits followed state law, and he maintained that they reflected generally accepted protocol at the time.

Robinson said that every reported sexual assault was thoroughly investigated. He said the kits, which had not been analyzed, were destroyed after victims withdrew their complaints, the district attorney's office declined to prosecute, a suspect was arrested or officers determined that no crime occurred.

In its analysis of the records, however, the Observer found that kits were discarded in 72 cases that were still categorized as open. About half of those cases fall under a 2009 state law that requires police to retain biological evidence in unsolved rape and homicide investigations.

In fall 2015, CMPD changed its protocol on sexual assault evidence testing, the city's statement said. Moving forward, the department intends to test every rape kit associated with a criminal case.

"Our detectives – like most across the U.S. – used to make decisions about testing sexual assault kits based on whether or not the test could result in information they needed for their investigation," Peacock said in Tuesday's statement.

"We now take a more global approach," she said. "We have all this legally obtained DNA evidence that might hold answers. If we test it and a profile is found, we can potentially re-open the case it's associated with and possibly even others."

In March 2014, CMPD received a request for information from the Joyful Heart Foundation, an organization that advocates for sexual assault survivors. The organization was trying to determine the size of the national backlog of untested rape kits.

That's when Crime Lab Director Matthew Mathis said CMPD realized it did not have an adequate method for tracking the number of kits turned in as evidence, versus the number tested or waiting to be tested. After months of research, Mathis said, CMPD found that about 1,000 rape kits from the past 10 years had been collected but not tested.

CMPD is among 16 jurisdictions that provided actual numbers to the foundation. According to its website, about 26 others are still collecting the information. Until recently, few state governments and no federal agencies required police departments to count or track the kits in their possession, Tuesday's statement said.

After auditing its backlog, CMPD in 2015 received a $557,974 grant from the N.Y. District Attorney Sexual Assault Kit Backlog Elimination Program to test 885 of its untested rape kits. In October 2016, CMPD received $1.13 million in grants from the National Sexual Assault Kit Initiative Program.

Besides paying to test another 300 kits and upgrading software to improve tracking of kits, the latest grant pays for these jobs for three years: a DNA analyst, a sexual assault victim advocate, a site coordinator and two part-time detectives.

The organization funding the first grant negotiated reduced testing prices with two of the country's largest private DNA testing labs. Because most grant recipients contract with the labs, CMPD must send the kits to the lab in batches. As of January, 600 had been sent for testing. The final 285 are scheduled for April, the city announced Tuesday.

City Council this week approved a contract with a second private DNA testing lab, which will assist with testing kits funded by the second grant.

So far, according to Mathis, CMPD has received results from 188 of the kits submitted. Of those, 54 yielded a DNA profile that can be entered into a national DNA database containing more than 15 million DNA profiles of convicted offenders and people arrested on sexual assault charges.

Mathis said CMPD's decision to test all kits submitted to the department has doubled the number being sent to the the crime lab. CMPD will likely need to apply for more grants to make the new grant positions permanent to prevent future backlogs, he said.

Before the decision to test all kits, CMPD's lab received an average of 11 requests from detectives each month to test kits. CMPD receives about 23 kits each month.

After months of research in 2014, CMPD found that about 1,000 rape kits from the previous 10 years had been collected but not tested. Grants are helping reduce the backlog and pay for new positions.
http://www.charlotteobserver.com/news/local/crime/article132640374.html
Tweet
How do you feel about this post?
Happy (0)
Love (0)
Surprised (0)
Sad (0)
Angry (0)
Tags:
altered evidence assault  kits Chain of Custody Big Three:
Catapult Used to Launch Marijuana Into U.S. From M...
Missing police evidence in Newport can't be found,...
Comment for this post has been locked by admin.