Six people with connections to the City of Meridian testified in a hearing regarding a potential breach of the police evidence room. 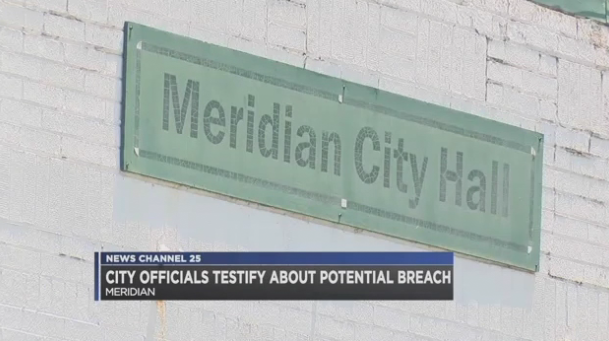 On Monday, six people with connections to the City of Meridian testified in a hearing regarding a potential breach of the police evidence room.

The Bosque County District Attorney Adam Sibley explained during the hearing, it had been brought to his office attention the code to enter City Hall was different, the locks of the evidence room had been changed and it appeared the door had been forced open. Officer Brian Wallace reported this incident during the time they were moving from a new location back to City Hall at the beginning of July. The DA's Office contacted the Texas Rangers, who then reached out to the city administrator about the people who entered the evidence room.

That room had evidence on the floor of a sexual assault case of a disabled woman last month. Paul Bibles, who was previously identified as Nelson Bibles in court records, is the suspect in the case. According to the affidavit, Bibles is accused of having sex and touching a 31-year-old woman with mental disabilities who could not consent to a sexual encounter. Court records state the victim went into the District Attorney's Office to tell them about it. In addition, the documents show Nelson admitted to touching her but he denied having sex with her.

The Bosque County District Attorney's Office brought a motion for this during a hearing for Bibles. In court, Sibley said the concern is the potential breach compromised the chain of custody, which means the order of places where evidence was located before it is admitted to court, for this case and dozens of others.

In Bibles' case, the victim's forensic exam was sent to the Department of Public Safety office in Waco but other items were kept in the evidence room at the Meridian Police Department.

Eight people have been served a subpoena to testify regarding the potential breach. Seven of them are associated with the City of Meridian. Officer Curtis Rust could not attend the hearing because he is on military deployment.

Garland said the keys to that room were initially put at a location at City Hall out in the open and later transferred to Garland's office. However, Wallace and Blanton testified only police officers had access to them. The city administrator who said she didn't know there was evidence outside of a locker said the former chief told her not to enter the room when he put a sign to keep unauthorized personnel out but she said she was not given a reason. When he testified, he said he explained to her there was evidence inside.

When Blanton resigned, he said he tried to give the keys of that room to an officer but the mayor told him he could keep them in his safe and give it to the officer in charge.

Upon his resignation, Garland said she ordered the locks to be changed, which Johnson and the son of Michael Walker did. She added it is a normal procedure to change the locks once someone leaves the city. She also admitted to removing a video monitor that recorded the inside of the room and near the room to verify no audio recordings were taking place. She said she didn't want conversations about personnel she had with the mayor to be recorded. Garland claims she did not remove any of the recordings from the device.

The case has been recessed until Rust who is on military deployment returns.