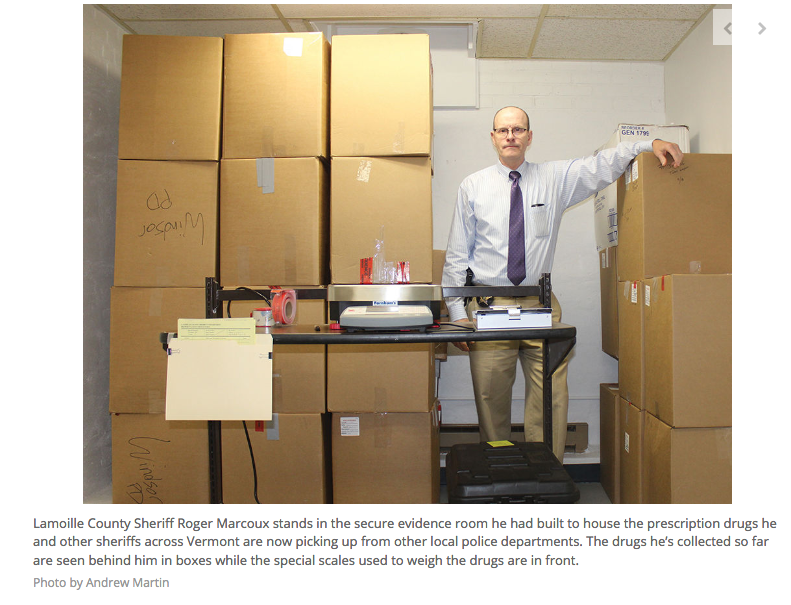 Half a ton: That's the weight of prescription drugs that Lamoille County Sheriff Roger Marcoux and his deputies have picked up from other police departments in the last month.

Marcoux is the point man for a new statewide drug take-back initiative that began in August. The program is just getting off the ground, and Marcoux and his deputies have made collections from only a handful of departments, but they've already taken hundreds of pounds of unused prescription drugs out of circulation.

The program makes it easy for people to turn in prescription drugs they aren't taking anymore.

In Vermont, "out of every five people with an addiction problem, four of them became addicted through prescription drug use," Marcoux said.

The Lamoille County Sheriff's Department and Morristown Police Department installed secure drop-off containers outside their front entrances where people can get rid of unused prescription drugs a few years ago.

Those containers can fill up pretty quickly, so police have to store the drugs in their evidence rooms until someone picks them up.

In the past the federal Drug Enforcement Agency would do that every six months. Marcoux and his team want to guarantee monthly pickups.

Marcoux thinks more departments would install the drop-off containers if the drugs weren't clogging up their evidence rooms.

"If you want more law enforcement agencies to host them, then you have to come up with a way to keep the drugs from overcoming their evidence rooms," Marcoux said.

Morristown Police Chief Richard Keith sees a lot of people dropping off prescriptions in the box at his station, and he looks forward to monthly pickups of the drugs.

"We take in quite a bit," Keith said. "A lot of people want to do the right thing. If we make it easier for them, they'll be more willing to do it."

Marcoux was approached last year by the Vermont Department of Health, which asked for his help in coming up with a state-run drug take-back program.

"There was about a year period where the DEA didn't participate in the take-back," Marcoux said, and police departments that had collected unused prescription drugs had no way to get rid of them.

Initially Marcoux was just going to be on an advisory committee, but he quickly approached the health departments about having the 14 county sheriffs coordinate monthly pickups from other police departments.

"They'll work with the other law enforcement agencies in each county," Marcoux said. He hammered out the plans for the new pilot program over several months and then signed a contract with the state in August.

Since then, Marcoux and his officers have been making most of the pickups themselves — in Franklin, Orleans, Lamoille, Windsor and Windham counties so far — but ultimately each county sheriff's department will be picking up the drugs and sending them to Marcoux's department, which will serve as the conduit and central coordinating office.

Each sheriff's department will be paid for their time and mileage in the pickup project, with the money coming from a $100,000 federal grant.

For increased accountability, two deputies wearing body cameras have to make each pickup, and the drugs are weighed during the pickup and again when they are dropped off at the secure evidence facility Marcoux had built for that purpose. The drugs will be held there until agents from the Drug Enforcement Agency can dispose of them all.

"We'll still be working with the DEA to dispose of it," Marcoux said. The drugs will be weighed again when being picked up by the National Guard, which handles trucking for the federal agency.