"We have 22 guns stolen, along with some narcotics 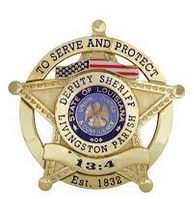 Livingston Parish law enforcement, like many other entities in south Louisiana, has been through the ringer thanks to the August flood.

The 911 call center was flooded, as was the prison and the old courthouse building. Apparently, somebody knew not everything was out of there, yet, including some old evidence that has now found its way back to the streets.

"That's the old prison, from way back when," Sheriff Jason Ard said while pointing up at the old building he used to call home. "That's actually where we keep our evidence at."

And it's now the scene of a crime. We'll get to the specifics in a moment.

The old courthouse in the town of Livingston used to be home to many things, including the Livingston Parish Sheriff's Office. To be clear, that's no longer where new evidence for pending cases is kept. That's at the new courthouse, of course. But investigators did keep some old evidence from closed cases at the old courthouse because there just isn't enough room yet for all of it at the new courthouse. The files for those old cases, that matched that evidence, were kept elsewhere, though. And then the flood hit.

"All our files, kept in Denham Springs, were destroyed. Cases from the 90s that have a shelf life. I have to now manually go through those evidence items to figure out what has been stolen," Ard added.

Somebody broke into the old courthouse. The break-in actually happened back in late October or early November of last year, but because of those destroyed files and because of everything else going on in the parish after the flood, it took a while to figure out what was stolen from those old evidence rooms. They've set up cameras now to watch over the place that much better, even though there is virtually nothing left now.

Ard said the thieves got in on the third floor of the building. The break-in point has been reinforced with heavy steel plates on the inside. But it took some doing just to get up there and cut through the bars. The sheriff badly wants the stolen items off the streets.

"We have 22 guns stolen, along with some narcotics. The narcotics should be very minimal and very outdated. However, they are still narcotics," he explained.

It's the guns that they only recently discovered were stolen and they need help finding them. In fact, one firearm has already been located.

"LSU Police recovered one of the weapons. That's a big thing for us because now we have someone we can speak with," Ard said.

He believes the thief could be anyone from someone working on the building after the flood to an old trustee. Regardless, there are now more guns on the street that shouldn't be. That's where the public comes in.

Anyone with information about the guns is urged to call Crime Stoppers at 344-7867, text CS225 plus your message to CRIMES (274637) or anonymously or go to www.crimestoppersbr.com.