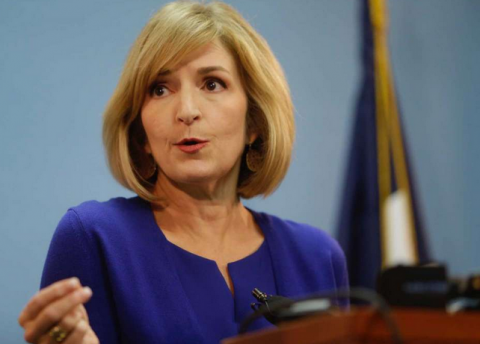 Harris
County District Attorney Devon Anderson arrives for a media conference
to discuss the thousands of pieces of evidence that were destroyed by
Harris County Pct. 4 and how this situation is affecting cases ... more


After the scandal came to light, the DA's office said that it was
reviewing all Precinct 4 cases dating back to 2007 and that prosecutors have already dismissed Bellamy's case and at least 140 others and is reviewing more than a thousand other pending cases and 600 that have already been disposed.

A 40-year-old Houston-area man arrested in Precinct 4 and whose case was later dismissed is suing Harris County and the District Attorney's Office, claiming malicious prosecution and that his civil rights were violated.

David Bellamy, of Spring, was arrested on drug possession charges in June of last year. The DA's office dismissed his charges last month as prosecutors grappled with a growing evidence destruction scandal at the Harris County Precinct 4 Constable's Office in which they say an evidence-room custodian destroyed nearly 8,000 pieces of evidence in January after being told to clean out the over-capacity room.

Bellamy was facing a 25-year prison sentence for a methamphetamine charge last month when his criminal defense attorney, Paul Morgan, learned on the eve of trial via an email from a Precinct 4 lieutenant that the evidence had been destroyed.

After the scandal came to light, the DA's office said that it was reviewing all Precinct 4 cases dating back to 2007 and that prosecutors have already dismissed Bellamy's case and at least 140 others and is reviewing more than a thousand other pending cases and 600 that have already been disposed.

Joe Jones, who is representing Bellamy in his case against Harris County, filed the suit in Harris County court Tuesday. Jones is seeking between $200,000 and $1 million in compensatory damages, according to the suit.

"It's really disappointing, that's what it is, that our system is being corrupted by people who are supposed to protect it," Jones said.

"An internal audit and lack of complete accountability will not suffice when thousands of lives have been jeopardized and likely ruined by the failure to protect the integrity and basic legal rights demanded within our criminal justice system," she said, in a statement her office released Wednesday morning. "The ability to receive unfettered justice in Harris County cannot be achieved until immediate action is taken to address and eliminate a deeply flawed and broken system of justice. Unacceptable and unlawful procedures and practices can no longer jeopardize the lives and liberty of countless individuals, or the future and integrity of the Harris County criminal justice system."