Saundra Adams, now 50, who had been a neighbor of Schreiber's in 1983, was arraigned Wednesday in Erie County Court on charges of second degree murder in the long unsolved killing. 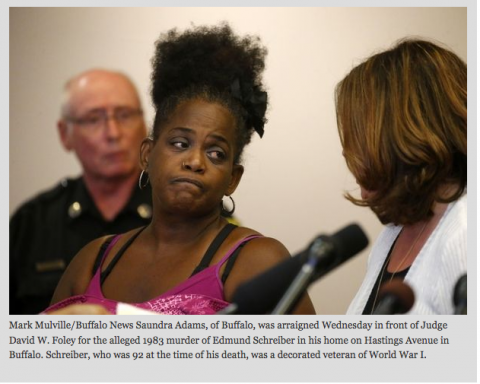 Thirty-three years after Edmund C. Schreiber, a slightly built, World War I veteran, was found strangled with eight of his own neckties in his Hastings Avenue home, technology caught up with police work. And that police work led to the arrest Wednesday of a Buffalo woman on murder charges.

Saundra Adams, now 50, who had been a neighbor of Schreiber's in 1983, was arraigned Wednesday in Erie County Court on charges of second degree murder in the long unsolved killing.

Investigators believe Adams acted with someone else in the attack on Schreiber, who was 92 years old when he was killed. Schreiber, born in 1891, was orphaned as a child, served in WWI and was awarded a Purple Heart. He and his wife raised their family in the house on Hastings, where they lived for more than 50 years. Schreiber's wife died about five years before he was killed.

On June 23, 1983, a neighbor and workers at a nearby senior citizens' center became concerned when Schreiber didn't show up for lunch as usual. They went to his home and his body was found on his bed, covered with blankets and pillows.

The homicide seemed particularly senseless to those in the Kensington neighborhood.

In addition to being elderly, Schreiber was barely over 5 feet tall and weighed only about 100 pounds. That didn't keep his killers from tying his hands and wrapping eight neckties – his own ties – around his throat to choke him to death.

Assistant District Attorney Thomas M. Finnerty said in court that some of the new evidence that led police to Adams was found in those neckties.

"The defendant's DNA was found on multiple knots on the ties used to strangle him," Finnerty told Judge David Foley.

He also said the house was ransacked, indicating the break-in started as a burglary, and that a fingerprint found on a dresser in the bedroom matched Adams'.

"The defendant has falsely denied being in the bedroom and being inside the home on multiple occasions," Finnerty said. "She has never offered an explanation for how her DNA wound up on his ties."

Adams was a teenager when the crime occurred, and prosecutors said she still lives in the same neighborhood.

Defense attorney Susan Karalus asked the judge to consider bail, noting the now-middle-aged Adams had almost no criminal record and worked as a librarian.

Finnerty countered that the 33 years between the crime and prosecution should not be considered a mitigating factor, taking into account the brutality of the crime.

"I do agree that the passage of time is an aggravating factor more than anything else," Foley said, and he ordered Adams held without bail.

Those detectives, in turn, credited now-retired detective Brian Ross for his commitment to the case and to seeing it resolved.

Ross was among those who went to court for the arraignme

Thirty-three years after Edmund C. Schreiber, a slightly built, World War I veteran, was found strangled with eight of his own neckties in his Hastings Avenue home, technology caught up with police work. And that police work led to the arrest Wednesday of a Buffalo woman on murder charges....
http://www.buffalonews.com/city-region/buffalo/neighbor-charged-in-1983-cold-case-using-dna-from-neckties-used-to-strangle-victim-20160907
Tweet
How do you feel about this post?
Happy (0)
Love (0)
Surprised (0)
Sad (0)
Angry (0)
Tags:
East Coast cold case homicide
Exclusive video sheds light on former police chief...
Defendant in evidence destruction scandal sues Har...