The video, security camera footage from the police department, does show him take items from a locker, thought from what we're told, it's a personal locker, not an evidence locker. 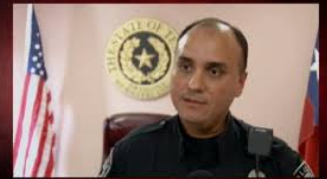 DRISCOLL - KRIS 6 News has obtained exclusive video that sheds more light on a former police chief accused of stealing drugs from an evidence locker. Ex-Driscoll Police Chief Michael Cantu resigned over those allegations back in June.

The video, security camera footage from the police department, does show him take items from a locker, thought from what we're told, it's a personal locker, not an evidence locker.However, the video also shows him mess around with a canister on a nearby desk, which is allegedly filled with drugs used to train K-9's.Cantu takes the canister away a few times, at one point, stuffing it under his shirt as he walks out of frame.

Each time, he eventually returns the canister to the desk he got it from.As for the locker, he spends a lot of time there too. At one point, he takes a large plastic bag of items out of the room, though its contents are unclear.

Eventually, he returns the bag to the locker, and again, we're told it's not an evidence locker.It's also important to note that nowhere in the video do you physically see Cantu remove any drugs from either that bag or the canister.Cantu denies taking any drugs from the police department, though he resigned over the allegations."All allegations against me are false and I disavow them totally, and I walk out with a clear conscience," he told the Driscoll City Council when he resigned.

No charges have been filed against Cantu. We are told the Texas Rangers have concluded their investigation, and have turned the case over to the Nueces County District Attorney's Office for possible prosecution.