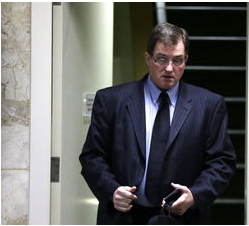 The lead homicide detective in the case testified and was cross-examined at length Wednesday about what one of Kepler's attorneys called a "serious error" related to the way police handled evidence.

Detective Mark Kennedy told jurors that he first saw Kepler after the homicide when Kepler arrived, accompanied by attorney Richard O'Carroll, overnight Aug. 5, 2014, at the Tulsa Police Department Detective Division downtown so Kepler could turn himself in following the fatal shooting of 19-year-old Jeremey Lake. Kepler, 56, is charged with first-degree murder on allegations that he shot Lake with a revolver twice in the 200 block of North Maybelle Avenue, where Lake lived with his aunt, before driving away in a black Chevrolet SUV. Kepler was not on duty at the time of the shooting. He later resigned from the TPD.

Kennedy was among about a half-dozen witnesses who testified Wednesday. Other law enforcement personnel who testified included a then-patrol supervisor who helped try to find Kepler after the homicide, a patrol officer who found the SUV at an east Tulsa motel three days after the shooting and a detective who found an arrest report related to Lake inside Kepler's house. Kepler, according to records, used police resources to look up Lake's address and other information after learning through Facebook that Lake was the new boyfriend of Kepler's daughter, Lisa Kepler. Kennedy identified a Smith & Wesson revolver that he said O'Carroll turned over to him a day or two after the shooting.

The gun had five spent casings and one live round, he said. The revolver, Kennedy said, used to be a TPD standard-issue service weapon but became available for purchase by officers after the department began using a different kind of gun. Lake's younger brother, Michael Hamilton, told jurors Monday that while sitting on his aunt's porch, he saw a man matching Kepler's appearance point a silver gun with a black handle at Lake.

The description Hamilton provided appeared to be in line with the firearm Kennedy identified Wednesday as being the weapon used in Lake's shooting. Kennedy said Kepler did not give a statement about the case that night on the advice of his attorney, but he told the jury that Kepler spontaneously asked, "He died?" after learning that he would be arrested on a first-degree murder complaint. After Kennedy outlined the circumstances of Kepler's arrest, O'Carroll asked him numerous questions about TPD procedures regarding the release of evidence in criminal cases. On Feb. 8, prosecutors notified District Judge Sharon Holmes that items Lake had in his pockets when he died were wrongly turned over to Kepler's daughter, Lisa Kepler, in 2015.

Lisa Kepler had begun a romantic relationship with Lake the week of his death and was the first witness to testify against Shannon Kepler. Records show that Kennedy authorized the release of items with Lisa Kepler's name on them, which included an Oklahoma identification card and an electronic benefit transfer card, to Lisa Kepler on June 18, 2015.

However, when she went five days later to the TPD property room to get her identification, she also received all of Lake's pocketed possessions, including a pocket knife and a small Ziploc-style bag with "dark particulate residue" inside it.

Lisa Kepler said Monday that she no longer has the bag or knife, but O'Carroll has said he is skeptical that the evidence is actually missing. He has suggested that the bag contained K2 residue and implied Lake was under the influence of K2 — synthetic marijuana — when he interacted with Shannon Kepler. O'Carroll asked Tulsa police last month to test the bag for drug residue, and the agency denied the request but did not tell him it had been released to Lisa Kepler.

A toxicology screen did not show any drugs in Lake's system after his death, but the state Medical Examiner's Office does not test for synthetic marijuana, because it has numerous forms. "Right now you don't have a solid piece of evidence to show that it has in fact gone missing," O'Carroll told Kennedy during one testy exchange.

The detective responded, "The only thing I know is it's not there. Is that good enough for you?" Kennedy said he has "no control over what the property room does" and maintained that he properly wrote down that the custodian was supposed to release only items with Lisa Kepler's name. The property disposition form Kennedy signed indicates that only items belonging to Lisa Kepler were authorized to leave the property room. "It's a serious error, is it not?" O'Carroll said of the release. Kennedy said, "It's a mistake, yes," but he also asked the attorney what he could have done differently to prevent it. During the questioning, Kennedy also said he did not personally review every piece of evidence found in Lake's pockets.

However, he later told Assistant District Attorney Kevin Gray that he felt no need to test the bag at issue because it was empty and because he thought it was used to hold papers like two other bags Lake carried. "I had no suspicion that it contained anything of interest to this case," Kennedy said, adding that Lake had never been arrested in any drug-related case and did not have drug paraphernalia.

Shannon Kepler's first trial ended in a mistrial Nov. 11 after jurors were unable to reach a unanimous verdict on the murder charge. He had been charged with felony counts of shooting with intent to kill related to Lisa Kepler and Hamilton, but the November jury found him not guilty of those charges. He is out on bond pending an appeal of two related misdemeanor convictions for reckless conduct with a firearm.

The lead homicide detective testified and was cross-examined at length about what one of Kepler's attorneys called a "serious error" related to the way police handled evidence in the case.
http://www.tulsaworld.com/news/courts/detective-grilled-over-wrongful-release-of-evidence-at-former-officer/article_f86bd612-8e0e-5da6-87d0-502285d2454b.html
Tweet
How do you feel about this post?
Happy (0)
Love (0)
Surprised (0)
Sad (0)
Angry (0)
Tags:
altered evidence assault  kits Chain of Custody Big Three:
Over 700 Untested Rape Kits Found By SFPD
South Amboy Detective Stole Cash From the Evidence...
Comment for this post has been locked by admin.