He calls the charge by an assistant public defender 'scandalous conjecture,' insisting he did not hide findings from the damaging audit 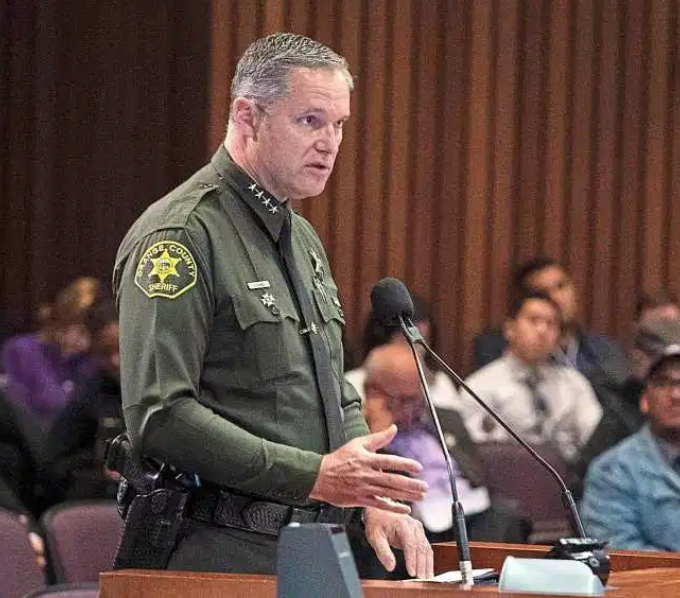 As Barnes argued that the organization ran like a well-oiled machine, the audit revealed that nearly one-third of the evidence seized by deputies — from videos to guns — was booked late, if at all. Such a finding could undermine countless ongoing trials or past convictions.

For Barnes, who was ultimately elected sheriff, the report also carried potential political risks if the public found out.

Barnes' message to voters was that previous scandals at the department — from the misuse of jailhouse informants to extract confessions, to security problems that led to the high-profile escape of three inmates, to the slaying of a nonviolent jail inmate placed in a cell with a serial killer — had been addressed and fixed. A report highlighting new problems — deputies routinely violating protocols for booking evidence — might undermine his message of professionalism.

Amid that backdrop, Barnes did not reveal the audit's full results to the District Attorney's Office, the Public Defender's Office, the county Board of Supervisors, nor any of the stakeholders whose cases could be affected. Official notification would not come until the Orange County Register published an article about the findings nearly two years later.

Assistant Public Defender Scott Sanders, in interviews and a recent court motion seeking sheriff's records, accused Barnes of intentionally sitting on the results to keep them from hurting his campaign.

Barnes reacted angrily last week, saying he did not hide or keep the report secret, and, in fact, used it to make improvements to the department's evidence-gathering system.

"The insinuation that information regarding the evidence audit was not shared publicly due to the election is not only patently false, but unsubstantiated slanderous conjecture by the Public Defender's Office," Barnes wrote in an email.

Barnes explained that the audit, which began in February 2018, was intended to identify evidence-booking problems. As issues were discovered, the department immediately took steps to make internal corrections and began 15 internal criminal investigations. Those investigations were submitted individually to the Orange County District Attorney's Office as they were completed, beginning in May 2018. No charges were filed, but four deputies were fired and seven were disciplined. Four more cases are pending.

Prosecutors were told piecemeal that an audit was done, but they were not given the full picture until after publication of the Register story, said District Attorney Todd Spitzer.

Barnes still insisted there was no cover-up.

"While members of the Public Defender's Office have the luxury of utilizing conjecture and innuendo in their efforts to defend their clients, it's imperative that our communication relies on the facts, not fiction orchestrated by the Public Defender,'' Barnes wrote.

Sanders responded: "If I understand the fake indignation correctly, while (the) Sheriff's Department will hide audits showing that thousands of items of evidence were likely never booked and that a thousand deputies didn't book evidence for more than a week, it was irresponsible for me to conclude the cover-up was intended both (to) devastate the rights of defendants and help win an election. I'll stand by facts and logic."

A timeline may prove helpful in the debate.

While considered the heir apparent for the sheriff's spot, Barnes was in a dogfight. Both retired Sgt. David Harrington, the mayor of Aliso Viejo, and Los Angeles County district attorney's investigator Duke Nguyen were campaigning for major reforms.

Barnes campaigned that the Sheriff's Department was in great shape. The scandals, though serious, were merely hiccups, exaggerated in the media and by appellate justices to further an anti-law enforcement agenda, Barnes and his mentor, Sheriff Sandra Hutchens, would say.

But in the June primary, Barnes captured less than 50 percent of the vote, meaning slightly more people wanted to see someone else as sheriff. Barnes was forced into a November runoff with Nguyen, who was surprised by his own success.

Harrington, who finished third in the sheriff's primary, said he doubts voters would have turned against Barnes if the evidence scandal had been revealed.

"It wouldn't have made a difference," Harrington said, "I guess there are people who just don't want to admit anything is wrong with their criminal justice (system)."

The general election months later in November was not exactly a cakewalk for the heavily funded Barnes, who ran as a virtual incumbent. He won by less than 9 percentage points against a newcomer who has since disappeared from Orange County's political landscape.