Burke is currently on house arrest after receiving a 12-month conditional sentence in connection with stealing drug evidence, which was removed from the police station's evidence locker 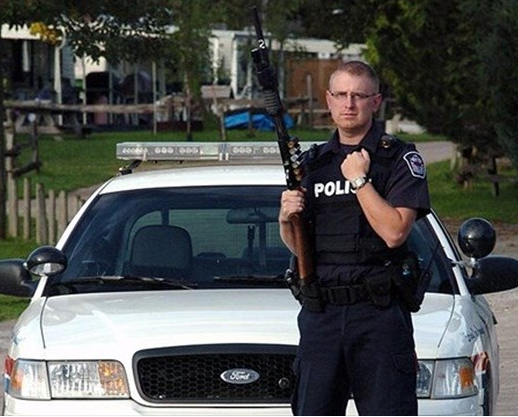 "I have ordered an investigation under the Police Services Act," Chief Mitchell said by phone on Tuesday, Jan. 21 morning.According to the OPP, at 8:10 p.m. on Jan. 20 officers from the City of Kawartha Lakes received information that a vehicle was being operated by a suspected impaired driver. Police say the vehicle was located on Peace Road, east of Lindsay and the investigation resulted in the arrested of Burke.

The 41-year-old was charged with operation while impaired-blood alcohol concentration over 80. He was also issued a 90-day licence suspension and the vehicle was impounded.

Burke is currently on house arrest after receiving a 12-month conditional sentence in connection with stealing drug evidence, which was removed from the police station's evidence locker in December 2017.

In handing down his decision, Justice Ferhan Javed weighed Burke's good character, dedication to family and career and efforts to make amends — including taking steps to address his mental health and addiction issues — against his "prolonged error in judgment" and "the gravity of the offence."

Burke testified earlier that his addiction to prescription medication related to post-traumatic stress disorder (PTSD) is a result of two traumatic incidents he was involved in as a police officer.

Although he acknowledged defence counsel Harry Black's argument for a conditional discharge or suspended sentence, Javed noted, "police officers are held to a higher standard" and are "not on equal footing" with the general public. As a result, there is a greater need for deterrence and punishment, he said "a strong message needs to be sent to other officers" that such conduct will not be tolerated by the courts.

The judge empathized with Burke's decision to do what he had to in order to continue to provide for his family and denial of WSIB support to treat his PTSD.

However, he stated Burke's mental health "does not tip the scales" when it comes to sentencing.

He explained the officer's breach of trust — magnified by the fact the drugs he admitted to taking from the evidence locker compromised eight active criminal cases — factored significantly in his decision. He said Burke's actions "strike at the very heart of the justice system" as he effectively "stole the very drugs he was working to get off the street."

Additionally, he continued, Burke knowingly kept 1,531 of the 2,431 hydromorphone tablets given to him to be entered into evidence as part of a drug-tampering investigation at a local pharmacy. Javed said, as a police officer, Burke knew the risk and knew the consequences but chose to break the law.

"It is not something I can easily overlook," said Javed.

In opting to have Burke serve his time "in the community" the judge rationalized that the alternate option of jail time would compromise rehabilitation efforts.

"This was Officer Burke's first brush with the law and likely his last," said Javed. "CSO (conditional sentence order) is, first and foremost, a jail sentence. It will carry the stigma of a conviction ... and could result in the loss of his career."

Burke remains suspended by the force, and now faces two PSA investigations which will determine his future.