A lone cigarette butt found in the impounded auto sat for years in an evidence locker, but it was worthless at the outset of the probe. 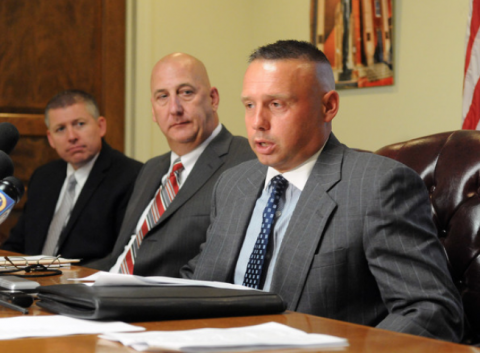 nvestigators were right on target in 1991 when they looked to Myrtle McGill's abandoned car for clues that would lead to her killer.

A lone cigarette butt found in the impounded auto sat for years in an evidence locker, but it was worthless at the outset of the probe. Two later developments led police and prosecutors to report this week that a jail inmate in Minnesota will be charged with homicide, 25 years after McGill was found dead in her White Township home.

The suspect is Charles Cook, 61, who authorities generally described as transient, homeless and a repeat criminal offender with records in several states across the country.

And he was a smoker.

At a news conference Friday in the county courthouse, state police pieced together the trail that had investigators frustrated from the day McGill, 76, was found dead on the kitchen floor in her South Sixth Street home.

Evidence first surfaced Dec. 9, 1991, when someone found McGill's auto parked in a rented parking space at the Greyhound bus station in Pittsburgh and had it towed away. No one knew to connect it with the killing because McGill, the widow of car dealer

The impound notice arrived in McGill's mailbox the day after her body was found, when friends grew concerned about getting no answer on her phone.

Other than bullet holes in a kitchen window, the .22-caliber slugs recovered from McGill's body and a sliding glass door shattered by a rock, the killer apparently made off only with McGill's car keys and left no other clues at her house, investigators said.

None could come up with a motive. An early theory that the suspects convicted of

burglarizing McGill's house several years earlier had come back for revenge was discarded when police confirmed the intruders were still in jail, according to news reports in the wake of the slaying.

Even the underground network of informants who sometimes knew things had nothing to tell police this time.

Leads dissipated like the smoke from the cigarette that had been left in McGill's 1982 Ford LTD.

"Cold case homicides are the obviously some of the most difficult and frustrating cases for law enforcement to investigate," said Cpl. John Fisanich, a state police public information officer.

Fisanich called Friday "a joyous day" as investigators identified Cook as the suspect, and subject of an arrest warrant obtained earlier in the week in a district court.

Cook had been convicted of drug offenses in 1987 in Clearfield County. He finished the minimum 4½- to eight-year term on Dec. 3, 1991, and instead of going to a residence in Philadelphia as required, he headed west in violation of his parole, Fisanich said, apparently getting off a bus in Indiana County and departing hours later in McGill's car.

"It was a random act of violence," Shields said Friday. "It was happenstance that he got off the bus in Indiana. This guy had no ties to Indiana County. He was merely passing through."

After apparently leaving McGill's car in Pittsburgh, the years took Cook through Ohio, Illinois, California, North Dakota and to Minnesota. Police said they found a dozen places where he stayed in Cincinnati, Cleveland and Canton, Ohio, and multiple locations in the other states.

Along the way Cook got in trouble, investigators said. In Washington state, he was convicted in 1998 or 1999 of forced sexual assault and was required to have his DNA profile registered in the Combined DNA Index System, known as CODIS, a national database maintained by the FBI.

The justice system even brought Cook back to Pennsylvania to complete his sentence for a parole violation in 2000, police revealed.

Meanwhile DNA technology had improved by leaps and bounds. Indiana County investigators took another look at the cigarette butt from McGill's car in 2007, and sent it to a crime lab where technicians got a hit on some DNA and linked the profile to Cook.

"If his DNA is not in the CODIS system, we probably are not sitting here today," Dougherty said. "That was the linchpin that put us in the direction of the suspect. DNA technology today is so much greater than it was in the '90s."

Most of them have since retired, and Handler passed away in 2012.

Shields was a state trooper early in the case, and has continued to work the case with Lipniskis, who took over as lead investigator for the state police in 2000.

Stepping up the probe after learning Cook's name, investigators were still stymied by his drifting lifestyle.

"It is time consuming. We had to follow him around, and there was no fixed address to track him down," Fisanich said.

At last, in December 2015, police came up with a real-time match for his location.

"Cook was located in Minnesota. He had been floating in between several local jurisdictions and he was reportedly homeless at the time," Fisanich said. Police in Worthington, Minn., had encountered him several times and arrested him at least once.

Lipniskis and Shields traveled to Minnesota in March, located Cook living in a broken-down motor home and quizzed him about the McGill murder.

Fisanich said they collected another DNA sample from Cook and a crime lab analysis again matched it to the DNA found on the cigarette butt.

Police wouldn't discuss what Cook said in their interview, but Shields said "he provided a statement and was somewhat cooperative."

Investigators made their move to file charges after learning Cook had been arrested and jailed again. Shields said Cook has been charged with assault and is in an undisclosed prison in Minnesota.

"We are working with the governor's office in Pennsylvania and Minnesota to extradite him back to Pennsylvania," Shields said.

McGill was well known in the Indiana community along with her husband, Lewis, a longtime owner of a car dealership that still bears his name. She lived alone in their South Sixth Street house four years after Lewis' death.

Their children now live out of state, and have kept in contact with investigators about their mother's death.

"We had a conference call with the daughters on Monday afternoon," Lipniskis said. "We updated them on the case and to say the least, they were pretty shook up. They're relieved. We expect them to be back for any court proceedings."

"I don't think they expected to receive that phone call," Dougherty said. "They seemed genuinely shocked, taken aback. But in a good way."

Kay Smith, of Indiana, attended the news conference Friday out of personal interest as a longtime friend of the McGill family. She described Myrtle McGill as being like a grandmother to her.

Like others in the community, Smith is looking for closure.

"I would ask him why," Smith said. "But also, part of me would like to face him and say 'I forgive you.'

"Somewhere in my heart, it's like, 'you took a beautiful, beautiful lady from us.' My first question would be, 'How could you have done this, what possessed you?' Maybe he has no answer for that, even years later.

"But it's not for me to judge in the end. I think there's enough anger. We need more forgiveness in the world."

Investigators said there is no timetable for Cook's return to Indiana County to face the charges.