Police chief not sure evidence is contaminated

The room, which is 14,000 square feet, is holding approximately 15,000 pieces of evidence, 46 percent of capacity, according to the Houston Police Department. 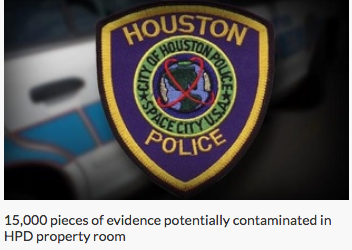 HOUSTON - Interim Houston Police Chief Martha Montalvo could not provide a time estimate on Thursday of how long it would take to assess how much evidence was contaminated, if any, by a malfunctioning sprinkler in a cold storage evidence room.

"I can't give you a clear number. I don't know," Montalvo said.

The room, which is 14,000 square feet, is holding approximately 15,000 pieces of evidence, 46 percent of capacity, according to the Houston Police Department.

"We believe all of the evidence is sealed in plastic containers, but we won't know that, obviously, until we finish the audit process," Montalvo said.

The chief said during a question-and-answer session with reporters Thursday that she did not believe that any sexual assault kits were damaged by the water that sprayed from a single broken sprinkler head for about 10 minutes.

It was not yet clear what caused the sprinkler to malfunction or how many other agencies would be involved in assessing the damage, if any, to criminal case evidence.

Obama Just Signed a Bill of Rights for Sexual-Assault Survivors