Nearly 40 years after a man was shot to death and a woman sexual assaulted and robbed in Beaufort, the Beaufort County Sheriff's Office
has arrested a suspect after DNA linked him to the crime. 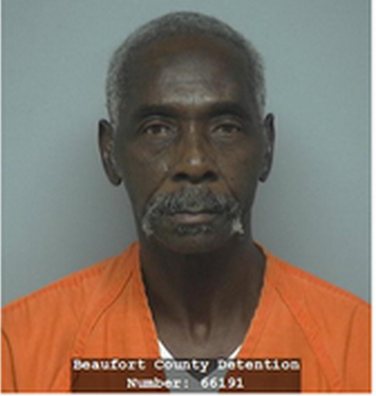 Nearly 40 years after a man was shot to death and a woman sexual assaulted and robbed in Beaufort, the Beaufort County Sheriff's Office has arrested a suspect after DNA linked him to the crime.

Isaiah Gadson Jr., 63, of Burton, was charged with murder, first-degree criminal sexual conduct, kidnapping and armed robbery Wednesday afternoon in connection with the shooting death of 18-year-old David Krulewicz on Jan. 6, 1980, according to a Sheriff's Office release.

On the day of Krulewicz's death, deputies were sent to a dirt path off Old Salem Point Road where they found Krulewicz shot to death. Several bullets had struck his body, the release said.

A juvenile female told investigators she and Krulewicz, her boyfriend, had parked his van on the path around 11:45 p.m. Jan. 5.

An African-American man approached and fired several shots into the van with a handgun, killing Krulewicz, the release said.

The female was then robbed by the shooter and sexually assaulted.

The suspect then ran away.

The surviving victim ran to her house a short distance away and called 911.

The case was investigated for years but eventually grew cold due to the limited forensic technology available at the time, the release said.

As forensic technology improved, the evidence collected from the incident were resubmitted to the S.C. Law Enforcement Division's Forensic Services Laboratory by the Sheriff's Office's cold case investigators.

A DNA profile was developed, but no matches were immediately found through searches of known offenders already in the database.

On Aug. 2, SLED DNA analysts found a match between the offender and Gadson, who had been arrested in June on an attempted murder charge, the release said.

Gadson allegedly shot a man in the neck around 9:40 a.m. in the parking lot of the Exxon gas station at the corner of Boundary and Hogarth streets on June 10.

He turned himself in to Beaufort Police later that day.

Interviews with the original witnesses involved in the 1980 murder were conducted, and on Aug. 9, deputies obtained arrest warrants, the release said.

Gadson was served the warrants at the Beaufort Police Department and taken to the Beaufort County Detention Center.