Kevin Burnham, a long-time Springfield police officer who oversaw the department's evidence room for nearly two decades, was charged in January with stealing over $385,000 in cash seized during drug investigations. 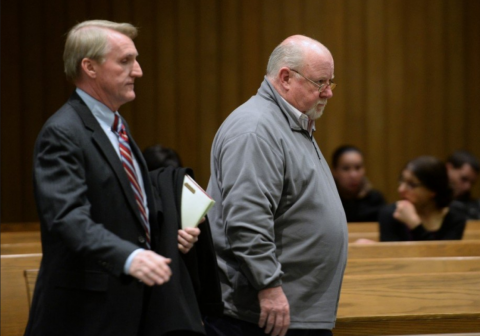 Allen, the chair of the council's finance committee, gathered finance officials in a city hall chamber to review the procedures. He stressed it was "not a witch hunt," and that the circumstances of the golf course investigation are still unclear. But the emergence of two high-profile law enforcement actions involving city agencies is concerning, he said.

"If we're going to run this city professionally -- we've got a couple of things that have come up -- let's make sure we have the procedures in place," Allen said in a phone interview before the meeting.

Kevin Burnham, a long-time Springfield police officer who oversaw the department's evidence room for nearly two decades, was charged in January with stealing over $385,000 in cash seized during drug investigations. The money was found missing during an audit initiated by Police Commissioner John Barbieri after he took office in 2014.

The state alleges that Burnham, who has denied all the charges, stole money between Dec. 4, 2009 and July 25, 2014 -- the day of his retirement party. Burnham, whose trial is set to begin in October, presided over an evidence room that contained stacks of cash that were never deposited into bank accounts. An officer who requested anonymity told The Republican that Burnham would frequently call him after he turned over evidence money, telling him his count was too high.

Additional audits followed, led by the city's Director of Internal Audits and Boston-based auditing consultant Marcum LLP. In February the police department agreed to implement a series of financial controls recommended by the auditors, including regularly depositing evidence cash in a bank account, using a computer program to track seized evidence, monitoring the evidence room with cameras and increasing evidence room supervision.

Then, in late July, Internal Revenue Service agents raided two city-owned golf courses and the home of Kevin Kennedy Jr., the golf pro who has managed the courses since 2006. The company owned by Kennedy Jr., the son of Springfield Chief Economic Development Officer Kevin Kennedy, has taken in $1.23 million from the city since 2012 for its services.

Agents seized boxes of materials from the pro shops at both courses and from Kennedy Jr.'s homes in East Longmeadow and Cape Cod. No criminal charges have been filed, and no details have been released on the nature of the IRS investigation.

But both the golf course's pro shops and the police evidence room are sites where city cash is held, and Allen said the incidents prompted him to gather the city's financial officials and review its procedures for handling cash.

"What are the other places we handle cash? Is there something we should learn about how we handle cash?" Allen asked a group of officials that included Director of Finance T.J. Plante, Director of Internal Audit Yong Ju No and Treasurer-Collector Steven Lonergan.

Plante said the city could not comment on the ongoing golf course investigation, but that the search for an external auditor to review the course operations is in progress.

The officials detailed the city's internal cash controls, which they said include multiple checks to prevent malfeasance or loose accounting in city departments.

But those controls did not extend to cash held in the police department's evidence room, which was subject to different legal standards and was not monitored by city financial authorities prior to the discovery of the missing funds, No said.

"The cash that was held as evidence was never on the city's financial statements," No said. "There was no visibility of what was there."

During Burnham's era, evidence cash was kept in the police department, not in bank accounts, No added.

"That was a common practice in other police departments," No said.

That has since changed, with the department implementing the cash controls recommended by the recent evidence room audit, No said.

The city has a wide range of departments that handle cash, from the obvious -- the treasurer-collector, the city clerk -- to the fire department, city library and Department of Public Works. Late book fees at the library, permit fees to the health department, toll booth revenues for the parks department -- all are monitored by the city's financial software, No said.

According to the city's cash policy, all departments must turn over cash to the treasurer each week, unless they take in $1,000 or more, in which case same-day deposits are required.

A treasurer's department official and a representative from the depositing city agency then count the money in the same room, and it is only accepted if the count squares with what the department has registered with Munis, the city's financial computer system.

"If it doesn't match, everything is handed back to the person from the department and they are told to correct it," Lonergan said -- a measure to ensure that there is a clear chain of custody of all city cash.

Allen asked what would prevent someone at a city department from pocketing cash and not reporting the revenue to Munis. That too is accounted for, Lonergan said.

If, for example, a city permit is handed out but payment is never registered, the city's systems will catch the irregularity and report that the department's expected revenue does not reconcile with what is on the books, Lonergan said.

The city's internal audit department has included a review of cash handling procedures in an upcoming audit to be released this year. It does not include a review of the golf courses, No said; that will be covered by the external review commissioned by Mayor Domenic Sarno earlier this month.