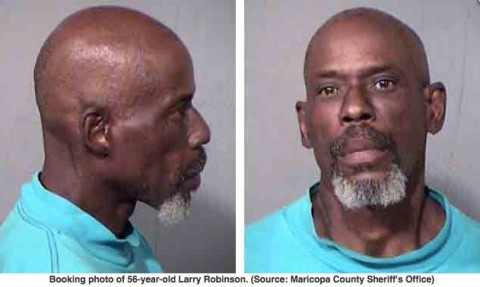 PHOENIX (KPHO/KTVK) - A man accused of stabbing and killing an elderly woman in 1982 has been arrested after DNA samples and fingerprints connected him to the crime, police said.

Larry Robinson, 56, was taken into custody on Tuesday. During an interview with Phoenix police detectives, Robinson couldn't explain why his DNA and fingerprints were found inside the victim's home and denied ever having been there, authorities said.

He was booked into the Fourth Avenue Jail on one count of first-degree murder.Robinson is accused of breaking into the home of Sally Bryant, an 83-year-old Phoenix resident, on Sept. 5, 1982, Bryant lived there alone.

Police said Robinson confronted Bryant and stabbed her many times in the face and chest.Her son went to visit her on Sept. 5, 1982, and found her dead on the kitchen floor. He notified other family members, who called police.

Bryant's family determined her portable TV and a paper sack containing an unknown amount of money was missing.Police found the house had been ransacked.Officers canvassed the neighborhood and several witnesses told them they had seen a shirtless man walking in the area with a portable TV set.

Police obtained descriptions of the man but he was not identified.In 2012, the Phoenix Police Department's cold case unit submitted to the crime lab several pieces of evidence, including the victim's slip that she was found wearing and pieces of stained floor tile found near the front door.

DNA profiles were developed pointing to an unidentified male, whose profile was entered into a database.In 2016, the Phoenix Police crime lab issued a report that indicated a match between the unknown male DNA profile and a known offender sample. Robinson was identified as the known offender.

On April 12, 2016, police found and interviewed him. He denied knowing anything about the case or victim, according to officers. He also said he had no idea why his DNA would have been identified inside of her home.Detectives said Robinson admitted to committing home burglaries but said he had never had any conflicts or fights with anyone during the break-ins.As the interview wrapped up,

Robinson submitted another DNA sample and police obtained a complete set of finger and palm prints.The prints were delivered to the crime lab with a request to compare his prints to the latent prints lifted at the crime scene.In May, a forensic scientist determined two latent prints from the victim's refrigerator door were identified as those belonging to Robinson. The finding then led to Robinson's arrest on Tuesday.