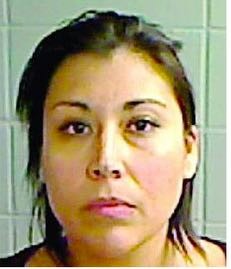 MORRISON – The sister of a former Rock Falls detective charged with theft is among five people accused of dealing cocaine and marijuana in the Sauk Valley for more than 2 years. On May 17, members of a local drug task force seized drugs, three cars, and $17,248 in cash from the Sterling home of Violeta "Violet" Jaramillo, 45, and Jody Canas, 44, court records show.

BY ANGEL SIERRA and KATHLEEN A. SCHULTZ 815-625-3600, ext. 5695MORRISON – The sister of a former Rock Falls detective charged with theft is among five people accused of dealing cocaine and marijuana in the Sauk Valley for more than 2 years.

On May 17, members of a local drug task force seized drugs, three cars, and $17,248 in cash from the Sterling home of Violeta "Violet" Jaramillo, 45, and Jody Canas, 44, court records show.Click here to see the probable cause report filed in support ot the asset forfeiture request involving Jody Canas and Violeta Jaramillo.

That same day, Detective Sgt. Veronica Jaramillo, 43, was arrested and charged with theft and official misconduct, both felonies, for stealing $1,741 from the Rock Falls Police Department's evidence vault, according to Whiteside County Court records.Veronica Jaramillo, who resigned from the police force May 27, is not mentioned in court documents detailing the purported drug conspiracy.

UPDATE: No charges had been filed in the drug conspiracy as of Friday afternoon, according to court and jail records and the state attorney general's office.

Violeta Jaramillo and Canas, her live-in boyfriend, are accused in the documents of selling cocaine and marijuana, and of using the proceeds to buy cars, real estate, drugs and The Grapevine Wine and Martini Bar, which Jaramillo owns at 205 W. Second St. in Rock Falls. Investigators say the pair often had the help of others they describe as co-defendants in the conspiracy.Police confiscated more than 2 pounds of marijuana, worth more than $20,000, and 2 ounces of cocaine from the Sterling home on Timber Drive owned by Violeta Jaramillo.

The three vehicles seized were a black 2014 Corvette Stingray convertible, a black 2006 Chevrolet Impala, and a white 1991 Pontiac Firebird.According to a task force report explaining why officers thought they had probable cause to take those assets, which was filed May 26, upheld by a judge the next day, and obtained by Sauk Valley Media this week:In February 2014, Canas was identified as a suspect in a potential drug conspiracy.

About 2 years later, between Dec. 16 and March 7, three controlled cocaine buys, with a combined street value of about $4,100, were made from Canas at the Timber Drive home.Then in April, acting on "an intercept of telephonic wire communications," police seized 1.75 pounds of marijuana, worth about $20,400, from Lynn H. "Scootie" Robinett of Dixon, who investigators say acquired the drugs for Canas, "to minimize his [Canas'] contact with law enforcement." No record of charges against Robinett could be found in this case as of Thursday.

On April 18, Canas is recorded meeting with "co-conspiring partners" at The Grapevine, when the bar was closed, "to exchange currency related to the ongoing drug enterprise," the report said.

Tweet
How do you feel about this post?
Happy (0)
Love (0)
Surprised (0)
Sad (0)
Angry (0)
Tags:
Arrests Narcotics/Drugs
DNA leads to arrest of suspect in Phoenix woman’s ...
Police Department Implements New Evidence Room Pro...
Comment for this post has been locked by admin.