Cold case investigators in Washington state have released DNA-generated composite sketches of a suspect in the unsolved slayings of a young Canadian couple three decades ago. 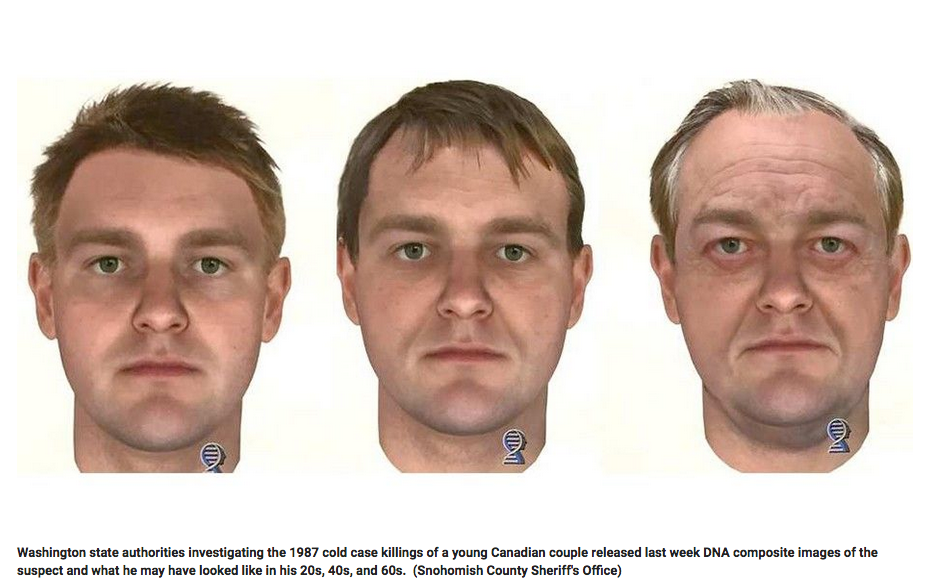 Cold case investigators in Washington state have released DNA-generated composite sketches of a suspect in the unsolved slayings of a young Canadian couple three decades ago.

High school sweethearts Tanya Van Cuylenborg, 18, and Jay Cook, 20, of British Columbia, were found dead in two separate locations after they failed to return home from a visit to the Seattle area in 1987.

DNA evidence collected during the investigation did not match profiles in any databases, but investigators with the Snohomish County and Skagit County sheriff's departments released three composite sketches of a Caucasian male shown in his 20s, 40s and 60s at a news conference in Everett last week.

"If these new pictures that this amazing new technology created triggers a memory you had — perhaps of someone who said something odd that lived in or near the Snohomish area or even Vancouver in late 1987 — please for the sake of my brother Jay, Tanya and all of our families, call it in," Cook's sister Laura Baanstra said at the news conference, according to the Vancouver Sun.

"When your brother or sister, daughter or a loved one walks out the door, you have no way to know that it's the last time you will ever see them."

The sketches were based on DNA phenotyping, the process of predicting physical appearance and ancestry from unidentified DNA evidence, the Associated Press reported.

"It gives us hope that we've got a likeness of what this person's going to look similar to," Jim Schart, a detective with the Snohomish County Sheriff's Office, said, according to Q13 Fox in Seattle.

Cook and his girlfriend went to Seattle on Nov. 18, 1987, to pick up parts for a business owned by Cook's father, investigators said at a news conference in Everett. They planned to spend the night in Cook's van and return home the next day.

Two days later, they were reported missing, the Sun reported.

On Nov. 24, a man found Van Cuylenborg's battered body on an isolated road south of Bellingham, Wash., according to the AP. She had been restrained with zip ties, sexually assaulted and shot in the head.

Her wallet, her ID, keys for the van and a pair of surgical gloves and a partial box of ammunition were found under the back porch of a Bellingham pub the following day, the Sun reported.

Two days later on Thanksgiving Day, Cook's body was found near Monroe -- 75 miles away from Bellingham. He had been strangled, the Sun reported. He had also been restrained with zip ties, which were recovered at the scene.

The suspect's DNA was found in the van, the AP reported.

There is a $50,000 reward being offering for information in the case, but the offer expires at the end of the year, Q13 Fox reported.

The Associated Press contributed to this report.