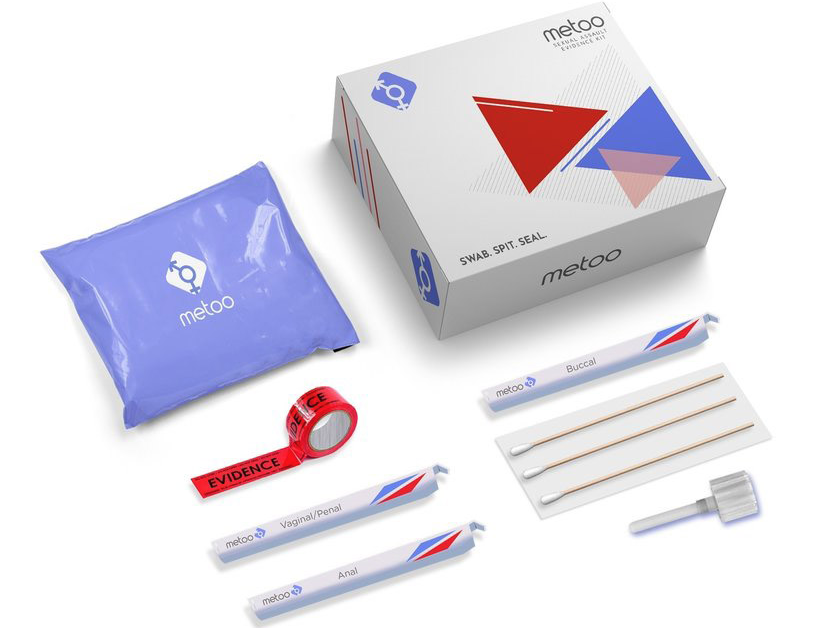 Creators of the MeToo Kit say the evidence collection process is so simple, anyone can do it. Following the instructions on a smartphone app, victims can conduct their own sexual assault exam.

While the time it takes may vary by individual, "the whole goal is to be as easy and seamless as possible," Campbell said.

By contrast, a meticulous exam by a certified sexual assault nurse examiner whose work will stand up to judicial scrutiny in North Carolina and other states can often take several hours.

One pitch to investors says the affordable MeToo Kit can even be used on children after a sexual assault.

Liz Herring, a veteran sexual assault nurse examiner from Fayetteville who has been certified to collect DNA and other evidence from the body of an assault victim for nearly two decades, told CPP that she's not buying the company's claims.

"This is ridiculous," Herring said. "I don't know how that would hold up in court, even."

Herring is far from alone in objecting to the at-home rape kits.

N.C. Attorney General Stein and Michigan Attorney General Dana Nessel have both recently issued statements warning that the company's promises are dangerous and are unlikely to send a rapist to jail.

"It is unconscionable that this company is suggesting that victims pay for a kit that likely won't help bring a rapist to justice," Stein said. "In fact, these kits are likely to undermine law enforcement investigations."

"This company is shamelessly trying to take financial advantage of the 'Me Too' movement by luring victims into thinking that an at-home-do-it-yourself sexual assault kit will stand up in court," said Nessel in a press release.

"Nothing could be further from the truth. Career prosecutors know that evidence collected in this way would not provide the necessary chain of custody."

In both North Carolina and Michigan, it doesn't cost a victim anything to have a sexual assault exam performed at a hospital.

No kits sold yet, but some donated

The MeToo Kit Co.'s website says the kit "does not need any specialized training to be administered, unlike most of the standard DNA evidence retrieval kits for sexual assault survivors."

MeToo Kit Co. CEO Campbell, who is 23 years old, said she wants to work together with law enforcement and advocacy groups to help make her product better. She said so far the company has not sold a single kit but has donated some to universities — Campbell did not disclose which ones.

"All of this backlash and response we have been getting, we were thoroughly surprised because we haven't officially launched yet," Campbell said.

"Then you get a notice from the Michigan AG and wait, what? What is happening? I don't even know what is happening because we haven't sold anything yet."

She said she is not trying to dissuade anyone from going to the hospital to get tested, but she knows that many who experience sexual assault will not get help in a timely manner because they are not ready — and it is those people she believes her product will help.

"We are encouraging the Michigan attorney general and the North Carolina attorney general, or any advocacy group, to speak with us about how to make this better," Campbell said.

"It's so important to give survivors another option."

But Herring said it's impossible for an untrained person to effectively examine themselves or even another person without cross-contamination of DNA or missing evidence needed at trial. Nurses must undergo more than 40 hours of training and have more than a year of nursing experience before they can be certified as a sexual assault nurse examiner.

SANE nurses do much more than collect DNA, Herring said.

"These people can't assess for themselves for injuries, which is a big deal," Herring said. "They are not understanding that there's other treatment they need."

Nurses can prescribe medications to prevent pregnancy, and they encourage the victim to get tested for sexually transmitted diseases after an attack.

"They need counseling information," Herring said. "We screen these people for suicidal ideation. There is a lot more than just a rape kit."

Though popular police procedural TV shows make the rape kit process look simple, it is anything but. The exams can last for hours as the nurse removes clothing in a specific sequence and, at times, literally combs over the victim's body to preserve evidence — including hair, fibers, saliva, blood and other bodily fluids.

"There is no way a layperson is not going to cross-contaminate a kit, even with their own DNA," Herring said.

Just two years ago, law enforcement and universities across North Carolina had more than 15,000 untested rape kits — the largest such backlog in the nation at the time. Since then, many departments have chipped away at the backlog or eliminated it entirely. Stein's office has advocated for millions of dollars to test the kits that remain.

A proposed law, called the Survivor Act, making its way through the General Assembly, requires law enforcement to investigate sexual assaults within 45 days and then send kits to an accredited lab for evidence testing — all at no cost to the victim.

The MeToo Kit Co. website does not list a price, and Campbell would not name one. Part of the company's business model includes selling its product to pharmacies and other businesses.

Skye David, an attorney for the N.C. Coalition against Sexual Assault, said the organization sent a warning about the MeToo Kit to all college campuses in North Carolina after hearing about the kits being donated to universities out of state.

"It is unfortunate that this company is attempting to market this product to profit from the survivors of sexual assault," an NCCASA press release sent last week reads. The commercial kit "relies upon the survivor to conduct their own forensic examination following a traumatic event and places an unfair amount of responsibility on the survivor."

In her interview with CPP, Campbell said families can use the kit for children who are raped.

"A lot of times families may not be able to bring their child to the police or the hospital immediately," Campbell said. "If we are able to help any children that have been sexually violated, that would be absolutely amazing."

When told that the two attorneys general said an at-home kit could undermine investigative efforts, Campbell said she wants to work with prosecutors, law enforcement and nonprofits to resolve problems with her product before it goes to market.

"I will never put a survivor in jeopardy of losing a case," she said. Of the attorneys general, she said, "Things are being misconstrued because we haven't been able to speak face to face. I would love to talk to them."

You can strengthen independent, in-depth and investigative news for all of North Carolina

Carolina Public Press is transforming from a regionally focused nonprofit news organization to the go-to independent, in-depth and investigative news arm for North Carolina. You are critical to this transformation — and the future of investigative and public interest reporting for all North Carolinians.

Unlike many others, we aren't owned by umbrella organizations or corporations. And we haven't put up a paywall — we believe that fact-based, context-rich watchdog journalism is a vital public service. But we need your help. Carolina Public Press' in-depth, investigative and public interest journalism takes a lot of money, persistence and hard work to produce. We are here because we believe in and are dedicated to the future of North Carolina.

So, if you value independent, in-depth and investigative reporting in the public interest for North Carolina, please take a moment to make a tax-deductible contribution. It only takes a minute and makes a huge difference. Thank you!

Tweet
How do you feel about this post?
Happy (0)
Love (0)
Surprised (0)
Sad (0)
Angry (0)
Tags:
rape kit testing
Beaver County Commissioner Sandie Egley questioned...
Thousands of rape kits untested in Arkansas
Comment for this post has been locked by admin.