Beaver County Commissioner Sandie Egley questioned why the county has to take responsibility for seized weapons. 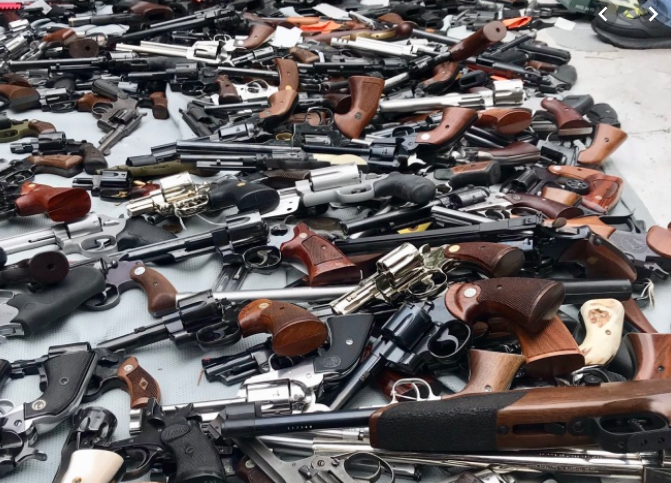 BEAVER — A county commissioner is questioning why the county has to hold firearms surrendered as part of final protection-from-abuse orders.

Commissioner Sandie Egley questioned Sheriff Tony Guy, who has been working with Beaver County Public Works to expand the size of his evidence room, about the requirements of the new law. Act 79, a set of state regulations that left sweeping changes to how PFA orders impact defendants, took effect in April, leaving Beaver County Courthouse employees and local police figuring out how to adapt.

Under the changes, defendants who are required to surrender any firearms or weapons they possess are no longer allowed to give the guns to a friend or family member for safe keeping. Instead, the weapons have to be surrendered to a local police department, the county sheriff or to a licensed armory.

Guy said he is preparing for an anticipated influx of weapons. His office has been holding weapons for many years, he said.

"We're increasing the capacity of our current room," Guy said. "We've kept those long before I came in office. This is just an increase in numbers."

A PFA order is a type of restraining order available to certain victims of domestic and sexual violence. It protects people who were abused by an immediate family member, spouse, former spouse, intimate partner or person with whom they have a child. In 2018, 512 PFAs were filed in Beaver County, according to data from the county court administrator's office.

Egley said she had concerns about the county's ability to handle guns for more than 500 cases each year.

"We could be holding these guns for a PFA for three years," she said. "Do we charge them?"

But not every PFA issued results in a weapons surrender, Guy said. That only happens in certain circumstances, when a final order is issued by a judge.

"There's no way to anticipate how many we would receive," Guy said. "We probably quadrupled what we can hold."

Currently, the sheriff's department has about 200 weapons in the evidence room, Guy said.

The conversation between Guy and Egley got terse at times, with Egley commenting that it was "difficult" when Guy answered questions succinctly or with few details.

"It's not evidence; it's personal property," Egley rebuked when Guy called the storage room an "evidence room." His response was to reiterate that he was just expanding the room, no matter what it's called.

Guy said his office will continue to log and store weapons and ammunition as it always has.

"It doesn't seem like (lawmakers) thought it through before they passed this law," Egley said. "I'm not sure why taxpayers have to pay for holding people's guns."