And more are likely coming. 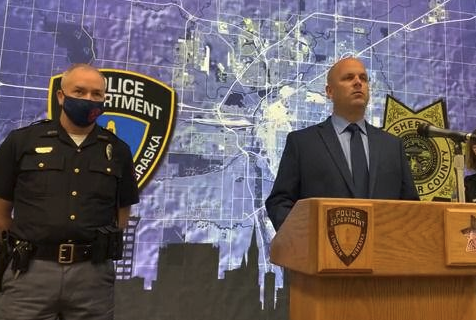 A month after news broke about the theft of more than $1.2 million worth of seized drugs from the Nebraska State Patrol's evidence room, it's led to dozens of cases being dismissed in Lincoln. And more are likely coming.

"Our office has dismissed several cases related to this issue, and we'll continue to review cases and make decisions, as we are required to do," he told the Journal Star.

Similar reviews are happening in the 13 other counties in the State Patrol's Troop H area, too.

Here in Lincoln, Prenda said he can't get into specific cases, but the office ultimately identified 116 open cases that needed to be reviewed. Of those, 66 have been closed; 37 remain open on warrant; and six are open and active.

"We will now be looking more closely into the 37 warrant cases and making individual decisions on those," he said.

Asked about the collective weight of drugs that had been seized in the dismissed cases and if any involved multi-pound drug busts, he said he couldn't get into specifics.

He said he also couldn't say whether the bulk of the stolen evidence had been part of active cases or was scheduled to be destroyed.

In late September, Lincoln Police and the head of the Nebraska State Patrol, Col. John Bolduc, broke the news of a rare security breach, unprecedented in Nebraska. A former State Patrol evidence technician, Anna Idigima, had been arrested on suspicion of stealing $1.2 million worth of drugs from an evidence room so her boyfriend, George Weaver Jr., could sell it.

A laundry list of drugs — more than 150 pounds of marijuana, 20 pounds of cocaine, 10 pounds of fentanyl, 9 pounds of heroin and 3 pounds of meth and 269 pills — had gone missing from the State Patrol's Troop H evidence facility in Lincoln over the summer.

A spate of overdoses, including the deaths of nine people and an unborn child, followed between July 25 and Aug. 19, prompting a health advisory.

It's unclear how many of them investigators have been able to tie to cocaine and fentanyl taken from the patrol's evidence facility. Police said testing still is being done.

As for Idigima and Weaver, they initially faced state charges, but since have been indicted for conspiracy to distribute cocaine, fentanyl and marijuana and face 10 years to life in federal prison if convicted.

And a couple of weeks ago, deputies in the Lancaster County Attorney's Office started reaching out to defense attorneys about cases they would be asking to drop.

A number of defense attorneys who spoke with the Journal Star said they didn't get much of an explanation. In some cases, when asked why, deputies said simply: "Don't you read the news?"

Prenda said one of the constraints to responding can be found in state statute 29-3523, which requires that a criminal justice agency respond to public inquiry "as if there were no criminal history record information" when charges are dismissed by the prosecuting attorney.

"There are constitutional and ethical considerations as well," he said, without elaborating.

The statute Prenda was referring to requires the courts to automatically seal cases that end in acquittal, are dropped by prosecutors, resolved through drug court or another problem-solving court or dismissed following a hearing and not the subject of a pending appeal.

It was intended to help give people clean slates so that prospective employers couldn't hold dismissed cases against them.

But its ripple effect leads prosecutors to feel constrained about talking about cases such as these.

And it makes it impossible for journalists to independently confirm details about which cases were dismissed through the courts. District Court searches by the Journal Star have turned up only a few motions to dismiss in cases that involved people participating in drug court and the dismissal of a fourth case involving undercover State Patrol buys of hydrocodone pills.

And, though Lincoln Police initially are investigating whether the overdose deaths were connected to the stolen State Patrol evidence, they have declined to give the names of those who died.

"Our leadership has notified me that we are not commenting on this inquiry," Officer Erin Spilker said this week. She declined to say why.

It's unusual, given that deaths under investigation by Lincoln police usually are public information.

There are a lot of unknowns yet about the full effect of the theft of State Patrol evidence, aside from the number of cases dismissed — 66 — and the potential for more to follow.

Candice Wooster, a Lincoln defense attorney, said her client whose case was dismissed wasn't very concerned with the how or the why.

But, she said, attorneys are curious how the county attorney's office is deciding which cases are being dismissed.

"And I think we are, as a community, trying to figure that out," Wooster said.

In the case she had, the prosecutor gave her a short-and-to-the-point reason: The drugs seized had been kept and maintained by the State Patrol. Wooster isn't sure if that means the drugs were gone or if a chain-of-custody issue led to the dismissal.

But, she said Lancaster County Attorney Pat Condon is respectable, and she fully trusts him to make appropriate decisions.

"So I don't have concerns about that," the defense attorney said. "I think it is just important to figure out how or why the decision is being made."

Candice Wooster, a Lincoln defense attorney, said attorneys are curious how the county attorney is deciding which cases are being dismissed. "And I think we are, as a community, trying
https://www.hastingstribune.com/news/state/nebraska/evidence-stolen-from-state-patrol-facility-results-in-66-cases-dismissed-and-potential-for-more/article_ac8e8a64-7fee-5556-b612-8e626a12e6a8.html
Tweet
How do you feel about this post?
Happy (0)
Love (0)
Surprised (0)
Sad (0)
Angry (0)
Tags:
evidence stolen drugs stolen cases dismissed
Attorney General says State Patrol can withhold po...
Toronto homicide detective stole drugs from eviden...