The former detective, who retired from the police force in 2012 but left the Homicide Section in 2009, was being evicted from his home Thursday when court bailiffs and moving company employees stumbled on the evidence, 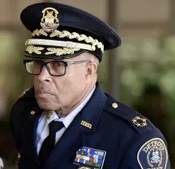 Detroit — Police officials have launched a criminal investigation to determine if any murder cases were tainted after a retired homicide cop was found with a locker full of evidence in his home.

The former detective, who retired from the police force in 2012 but left the Homicide Section in 2009, was being evicted from his home Thursday when court bailiffs and moving company employees stumbled on the evidence, Detroit police chief James Craig said Friday.

"They were evicting him, and the moving company and bailiff were tossing items away when they came across a locker with evidence in it," Craig said. "The evidence was still sealed or boxed up. They notified us, and it appears to be evidence from old homicide cases.

"We're mulling through it all now," Craig said. "We're concerned this could taint some cases. What if some of this evidence was never introduced in court? I'm not saying that's what happened; right now, we just don't know. But that's what we're looking into."

Craig said the former detective worked in the Homicide Section for six years. He said he's not sure how many cases are attached to the evidence discovered Friday.

"There could be multiple pieces of property for one case," he said. "We're doing an inventory of the evidence now."

Craig said the retired detective could face a variety of criminal charges.

"If (keeping the evidence) impacted a criminal case, it could be obstruction (of justice), or any number of things," he said. "If he was a current employee, I could at minimum charge him with neglect of duty, but he no longer works for us."

Craig said he doesn't know what the police department's record-keeping practices were in 2009 when the detective left the homicide unit, but he said current rules require an "aged property list" to be kept. During that process, if evidence isn't returned within a certain time frame, it's flagged, Craig said.

"In addition to the aged property list, one thing that Crime Scene Services put into place in October 2018 as an added layer is: When when a person retires, we check to see if they still have any outstanding property," Craig said. "It's called 'property clearance.'

"Right now, our focus is on finding out whether any cases were tainted by this," the chief said. "We've launched a criminal investigation and we'll go from there."

Police are trying to determine if any murder cases were tainted after evidence was found in the home of a retired Detroit homicide cop.
https://www.detroitnews.com/story/news/local/detroit-city/2019/02/08/ex-detroit-homicide-cop-found-locker-full-old-evidence/2812429002/
Tweet
How do you feel about this post?
Happy (0)
Love (0)
Surprised (1)
Sad (1)
Angry (0)
Tags:
homicide cop evidence locker
Nebraska county seeks help in paying $28M judgment
Former St. Louis officer accused of stealing suspe...
Comment for this post has been locked by admin.