Fisher theorized the seized money, which was kept inside an evidence room safe in two separate packages, fell onto the floor and into a trash pile beneath the safe. 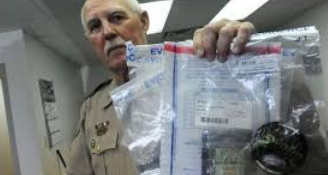 STAUNTON - Former Augusta County Sheriff Randy Fisher and his son are under investigation by Virginia State Police and are suspected of illegally possessing items discovered missing from an evidence room in 2015, newly available court documents show.

Several other former employees also are being probed by state police, including Fisher's former righthand man, retired Capt. Glenn Hanger, according to a search warrant that was unsealed Monday in Augusta County Circuit Court.

State police have seized hard drives and thumb drives, as well as emails between Fisher and Hanger, records show.

Virginia State police began investigating the Augusta County Sheriff's Office in 2015 after The News Leader revealed that nearly $4,000 in seized drug money was missing from a heavily monitored evidence room at the sheriff's office. Also missing: a digital scale used for drugs, a spoon with drug residue, a bag of marijuana and another bag with a "crystal substance," according to paperwork provided by Fisher prior to his retirement last year.

When questioned by The News Leader in 2015 about the $3,849 that went missing, Fisher initially claimed two "outside agencies" had looked into the matter. When pressed to name the agencies, Fisher declined.

During an April 2015 interview, Fisher said he alerted then- Commonwealth's Attorney A. Lee Ervin about the disappearance of the cash. However, Ervin said he wasn't told about the missing money until a month later, which prompted him to ask the Virginia State Police to investigate in May 2015.

Fisher theorized the seized money, which was kept inside an evidence room safe in two separate packages, fell onto the floor and into a trash pile beneath the safe.

"And we took it to the landfill, buried it," Fisher said.

During his initial interview with The News Leader, Fisher was also queried about the evidence room door being left open and unlocked, an allegation he denied. However, two weeks later in an email he wrote, "I have since learned after talking to you that there was an instance in which the evidence room door was left open and unattended one time about a year ago," he said.

Fisher said he wasn't told about the breach until nine months later. The room was left unlocked for about six hours with the "door standing open," he said.

Asked if it was unusual that the head of a police agency wouldn't be informed for nearly a year about his evidence room being left unattended, Fisher said it wasn't abnormal because nobody was seen entering the unlocked room. The sheriff said members of his staff "made a judgment call" in not notifying him.

At the time, Fisher labeled it a "non-issue."

It now appears that Virginia State Police suspect that Fisher and his son, Alex Fisher, might have handled some of the missing evidence.

Alex Fisher was not employed by the sheriff's office.

The affidavit also stated, "Correspondences for Sheriff's Sales and Public Auctions and other communications are sought on ... cloned hard drives." The significance of those alleged communications was not clear.

The search warrant, requested in relation to an embezzlement and grand larceny investigation and executed in June but sealed by a judge's order until Monday, shows that state police seized hard drives and thumb drives from the Augusta County Government Center's IT Department.

Fairfax Assistant Commonwealth's Attorney J. David Gardy asked that the search warrant be sealed because it "would place the investigation in jeopardy." Gardy is also the special prosecutor assigned to the case.

Named interim sheriff in 1998, Fisher was elected and then re-elected several times before retiring at the end of 2015. Reached by phone at his home Monday night for comment, Fisher said he was unaware of the state police investigation into his alleged activities.