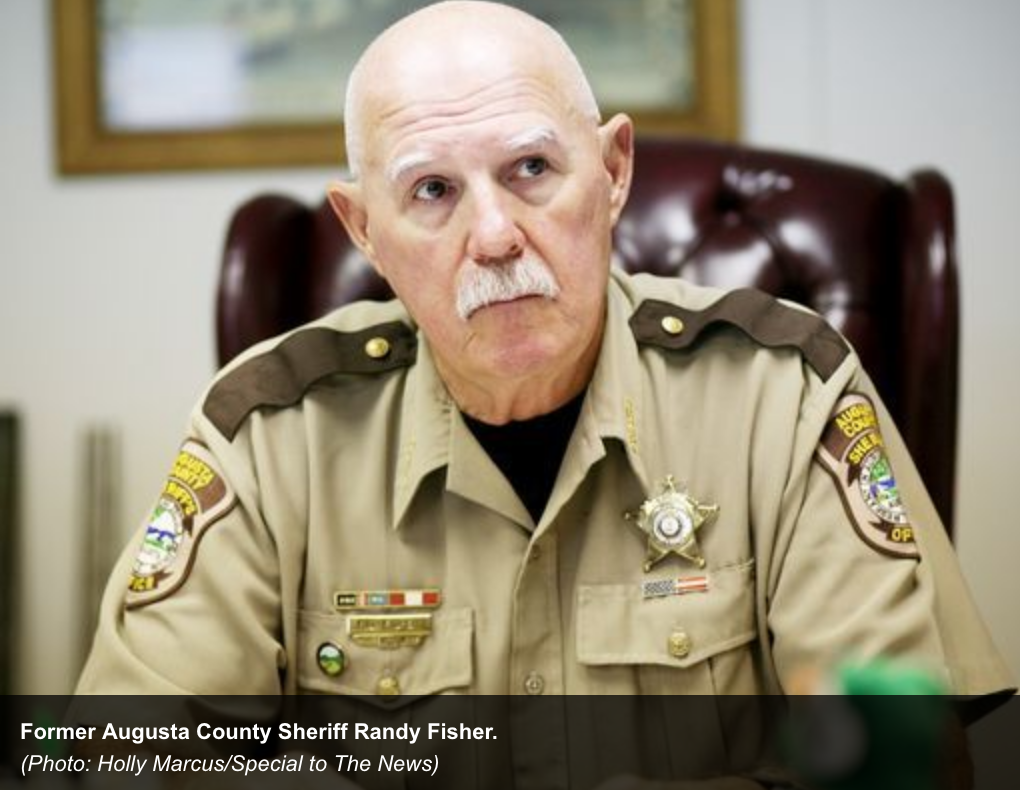 RICHMOND - A son of former Augusta County Sheriff Randy Fisher has been charged in connection with an ongoing two-year probe into items discovered missing from an evidence room at the sheriff's office in 2015, according to Virginia State Police.

Alex H. Fisher, 27, of Waynesboro, is charged with grand larceny and larceny with intent to sell or distribute stolen property. Police said the item in question was a gun.

The story was originally broken by a News Leader investigation.

"The two counts stem from a state police investigation into the Augusta County Sheriff's Office's chain of custody practices related to its evidence room during the former sheriff's administration," said Corinne Geller, a spokesperson for the Virginia State Police, told us Monday during a follow up on our exclusive investigation. "The larceny was of a firearm that had been seized as part of an investigation conducted by the sheriff's office."

The Virginia State Police Bureau of Criminal Investigation's Appomattox Field Office, at the direction of the special prosecutor assigned to this case, obtained two arrest warrants for the younger Fisher last week. State police arrested him at a residence in Newport News, Geller said.

Alex Fisher was not an employee of the sheriff's office. When asked how he allegedly got access to the evidence room, Geller said she could not comment.

In October, The News Leader reported that former Sheriff Randy Fisher and his son were under investigation by state police in connection with the evidence room at the Augusta County Sheriff's Office.

Randy Fisher has not been charged.

Other items were also reported missing at the time by Sheriff Fisher, but none of the items listed was a firearm.

During an April 2015 interview, Fisher said he alerted then-Commonwealth's Attorney A. Lee Ervin about the disappearance of the cash. However, Ervin said he wasn't told about the missing money until a month after the fact, which prompted him to ask the Virginia State Police to investigate in May of that same year.

Fisher theorized the seized money, which was kept inside an evidence room safe in two separate packages, fell onto the floor and into a trash pile beneath the safe. He said it was probably buried in the landfill.

During his initial interview with The News Leader in 2015, Fisher was also queried about the evidence room door being left open and unlocked, an allegation he initially denied. However, two weeks later he admitted the door was left wide open for about six hours.

He wasn't told about the breach for nine months.

Fisher said it wasn't unusual that the head of a police agency wouldn't be informed for nearly a year about his evidence room being left unattended, because nobody was seen entering the unlocked room. The sheriff said members of his staff "made a judgment call" in not notifying him.

At the time, Fisher labeled it a "non-issue."

Based on the search warrant unsealed in October, it was clear that police suspected Fisher and his son might have handled some of the missing evidence.

The affidavit also stated, "Correspondences for Sheriff's Sales and Public Auctions and other communications are sought on ... cloned hard drives." The significance of those alleged communications was not clear.

The search warrant, executed in June 2016 but sealed by a judge's order until October, shows that state police seized hard drives and thumb drives from the Augusta County Government Center's IT Department.

Named interim sheriff in 1998, Fisher was elected and then re-elected several times before retiring at the end of 2015.

On Monday, Sheriff Donald Smith, who took over from Fisher after winning a four-way race in the fall of 2015, said he could not comment on the arrest because the investigation by state police is still ongoing.

According to the warrant, several other former employees of the sheriff's office are also being probed by state police.