The San Joaquin County Sheriff's Office has lost about 10,000 pieces of evidence and stored items, says the vendor who provides the software
that manages the evidence room. 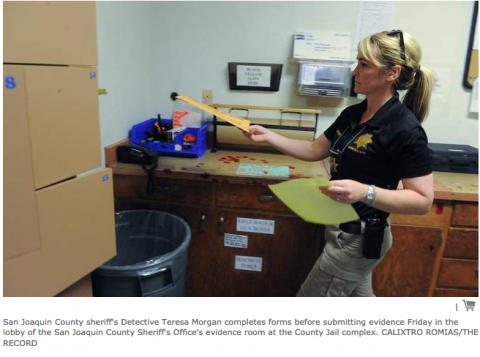 The San Joaquin County Sheriff's Office has lost about 10,000 pieces of evidence and stored items, says the vendor who provides the software that manages the evidence room.

Brian Germann, 52, of Linden-based Wayne Enterprises says "gross negligence" has left the evidence room a mess, and that could compromise criminal court cases."If the evidence room is not rectified … the integrity of the evidence room will be lost and there will be many families who are going to be extremely upset with the sheriff," said Germann.

Sheriff Steve Moore said he was unaware of the alleged problem. Preliminary research indicates no such missing evidence, he said. Moore vowed to investigate further."Do I take this very seriously? Yes," Moore said. "I try to account for everything."The agency's evidence room is a secure area within a warehouse in the County Jail complex.

Deputies turn evidence over to an evidence custodian. That person enters it into a computer catalog and places it on a shelf.The evidence is everything from weapons to recovered stolen property to "biologicals" such as rape kits, which go into a refrigerated area.

"Germann said he was shocked. "I go, 'Well, don't you think it would be important to take a look at some of these to see what's going on?' And she said, 'Well, we already decided we're going to deal with that later.' "Germann also alleges the "chain of custody" of many items is incomplete.

Meticulous records of all who handle, check out or dispose of evidence ensure evidence is not compromised."It was a huge thing," Germann said. "It jeopardizes every single case inside that evidence room."He added that on at least one occasion the fridges went down, possibly compromising the biologicals.

As years passed without a cleanup, Germann says, "It got me very concerned for my company because sheriffs' departments are very political. More than likely it's going to be my company that's going to take the fall for it."Germann's relationship with the Sheriff's Office also may have soured over a family matter.

Sheriff Moore wondered aloud why Brian Germann never informed him of the alleged evidence room mess."I can't order something done that I don't know needs to be done," Moore said.Germann responded that any number of deputies and supervisors knew.

He provided copies of emails alerting staffers of glaring problems. One included a DVD containing pictures of the clutter.Sheriff's employees should have reported up the chain of command, Germann argued. "I am just the vendor," he said.In any case, Moore vowed to fix the evidence room, if it needs fixing, though a 2015 audit found everything in order, he said.

The sheriff pledged to handle the issue openly, calling the matter "serious business.""If your evidence, you can't show where it came in, who had it, who handled it until it gets to court, and then is analyzed, whatever, yes, it's going to compromise cases. That's a given," Moore said.But, he added: "So far we've not seen any of that."— Contact columnist Michael Fitzgerald at (209) 546-8270 or . Follow him at recordnet.com/fitzgeraldblog and on Twitter@Stocktonopolis.