It wasn't the first time someone claimed a Krispy Kreme doughnut was a type of drug. But the joke wasn't funny for a Florida man who was arrested when an officer mistook doughnut glaze for methamphetamine. 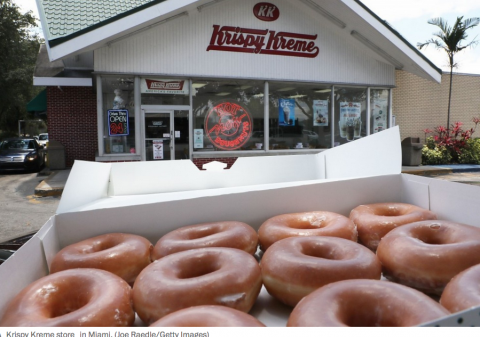 It wasn't the first time someone claimed a Krispy Kreme doughnut was a type of drug. But the joke wasn't funny for a Florida man who was arrested when an officer mistook doughnut glaze for methamphetamine.

Now Daniel Frederick Rushing is looking to sue the Orlando Police Department, which is also facing heat for its inaccurate roadside drug test.

Rushing was arrested by Orlando police two weeks before Christmas after they thought he was acting fishy near a 7-Eleven convenience store. Officers had been conducting surveillance on Colonial Drive after reports of a high level of drug activity in the area, according to a police report obtained by The Washington Post.

Rushing told the Orlando Sentinel that he had been playing taxi driver for friends that day. He had just dropped off a neighbor at a hospital for a chemotherapy session and was giving another friend who worked at the 7-Eleven a ride home. But when officers saw Rushing go into the store twice without making a purchase, they grew suspicious.

Officer Shelby Riggs-Hopkins followed Rushing's car and pulled him over. Rushing told the officer that he had a concealed gun, and she asked him to step out of the car for her safety. That's when Riggs-Hopkins saw what she thought were drugs on the floorboard.

"I recognized, through my 11 years of training and experience as a law enforcement officer, the substance to be some sort of narcotic," Riggs-Hopkins wrote in the report. The officer retrieved several pieces of the white substance from the floorboard, ran a test and "received a positive indication for the presence of amphetamines." Twice.

Still, Rushing was booked into jail and had to post $2,500 bail, according to court documents.

He was vindicated a month later — and the meth possession charges were dropped — when the Florida Department of Law Enforcement's chemistry section tested the substance found in his car. It detected no signs of drugs.

Rushing, who retired after 25 years as an Orlando parks department employee, spoke about the ordeal only recently and told the Sentinel that he has hired a lawyer and is asking the city to pay him damages.

"I got arrested for no reason at all," he told the newspaper. He expects to file suit next month.

A New York Times investigation on roadside drug tests found that the testing kits used by Florida officers are far from reliable:

There are no established error rates for the field tests, in part because their accuracy varies so widely depending on who is using them and how. Data from the Florida Department of Law Enforcement lab system show that 21 percent of evidence that the police listed as methamphetamine after identifying it was not methamphetamine, and half of those false positives were not any kind of illegal drug at all. In one notable Florida episode, Hillsborough County sheriff's deputies produced 15 false positives for methamphetamine in the first seven months of 2014.

A spokesperson for the Orlando Police Department told WFTV "there is no mechanism in place for easily tracking the number of, or results of, field drug testing." Enter some description here...
https://www.washingtonpost.com/news/morning-mix/wp/2016/07/29/florida-man-arrested-when-officer-mistakes-krispy-kreme-donut-glaze-for-meth/
Tweet
How do you feel about this post?
Happy (1)
Love (2)
Surprised (1)
Sad (0)
Angry (1)
Montana gets $2M federal grant for untested rape k...
Time to get serious about protecting evidence
Comment for this post has been locked by admin.