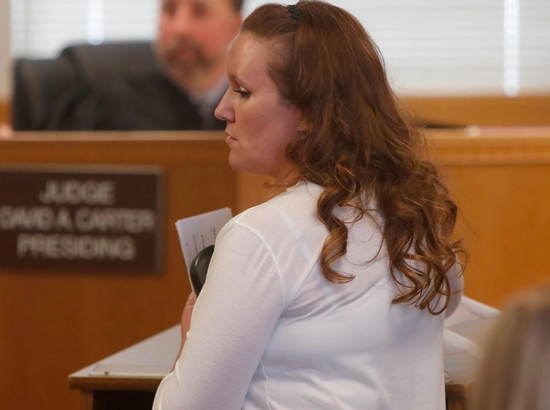 Charging documents filed against a former Billings Police Department evidence technician describe her using record-keeping software to allegedly steal enough drugs from the evidence locker over roughly six months to be able to consume as many as 20 pills a day. Charges also state she "thought she 'would die' if she kept taking pills."

Rawlyn Michelle Strizich, 38, has been charged with tampering with public records or information, a felony crime punishable by either a maximum of 10 years in jail, a fine not to exceed $50,000 or a combination of the two.

"Anything you'd like to add, ma'am?" Justice of the Peace David Carter asked while considering the terms of her release.

Carter ordered her released on her own recognizance and set her arraignment for June 20 in front of District Court Judge Gregory Todd.

The affidavit charging Strizich, signed by Yellowstone County Attorney Scott Twito, states that a January 2018 audit completed by BPD Sgt. Mitch Hart found drug evidence missing from "approximately 130 cases," of which "it was later determined that 38 cases had been referred to the county prosecutor's office for prosecution."

On Jan. 20, Strizich contacted Beth Gartner, her immediate supervisor at the time, and city employee Suzette Phillips. When she met with them she "admitted to stealing narcotic pills from the drug cage that is located within the building," according to court documents.

Beginning in July 2017, Strizich would use the record-keeping software called FileOnQ to keyword search for drugs before stealing them from the drug cage, she told Gartner, according to court documents.

"The Defendant admitted that if Gartner were to check the FileOnQ system and examine cases that were supposed to contain narcotics she would find all of the pills gone from the facility," documents say.

Strizich told Gartner that she originally intended to return the packaging the drugs were kept in but later disposed of it all.

"After the Defendant finished her confession, Gartner notified BPD command staff and the Defendant's access to the facility was immediately taken away and she was placed on administrative leave," according to court documents.

The charging documents also offer some details into the subsequent investigation by BPD detectives into Strizich's alleged thefts.

That investigation also revealed she had sex separately with three BPD officers either on city property or while they were on duty.

BPD Chief Rich St. John has previously said the incidents of sex with officers pre-dated Strizich's time at the evidence locker and were unrelated to the drug thefts.

Those incidents occurred between 2013 and the summer of 2016.

Entry log printouts examined by BPD detectives showed Strizich entered the building on several dates when she was not scheduled to work, had entered the drug cage numerous times since July 2017 and had last been inside it on Jan. 16, 2018.

All evidence technicians were interviewed during the investigation and none saw Strizich take drugs from the facility, according to court documents.

Detectives also recovered some text messages Strizich sent to a former technician who worked with her at the facility. In those messages she admitted to stealing hundreds of pills and having an addiction to pain medication.

"She stated she took pills from inactivated cases, but 'It got to the point I didn't care,'" documents say.

Those text messages were "sent on and around the same time" Strizich confessed to Gartner and Phillips that she had been stealing pills, according to court documents.

Surveillance footage from the area of the drug cage showed Strizich "shove something into her pocket while inside the cage" and other surveillance cameras showed her writing words on sticky notes before running to the drug cage, according to court documents.

Strizich gave detectives a handwritten list of the drugs she had searched for in the record keeping software. The drugs listed were Oxycodone, Oxycontin, Hydrocodone, morphine, M367, M365, K9, Percocet, Lortab and Vicodin.