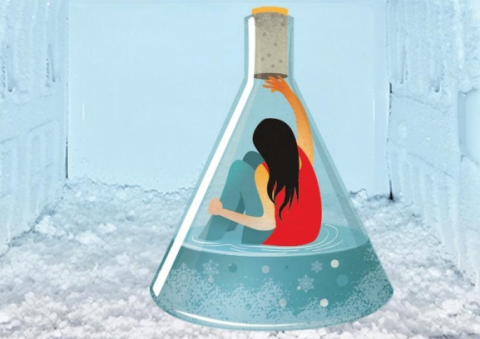 The trouble started with a freezer, and the question of just what could be done to get rid of it and open up some space at the Santa Fe Police Department headquarters. Someone cracked the door, and found materials tied to about 100 sexual assault cases.

Evidence dated back to 1975, and included anything cops thought might someday be useful in solving the crime. In a pre-DNA era, that net was cast widely. "We had some strange things in this freezer," says Lieutenant Michelle Williams, who worked with SFPD spearheading the project. "We had frozen high heels, frozen bed sheets."

The effort to clean out the freezer led to the police department spending a year and a half, starting in January 2014, with seven officers processing 313 sexual assault evidence kits to ship to the state forensic lab, coming in and out of the task on top of handling every other robbery, stabbing, domestic violence case, homicide and incoming sexual assault report. The DNA evidence that emerged has already helped to solve cases, and has linked one to another.

A DNA profile from a 1985 case links Susan LaPorte's murderer to a rape in Bernalillo County within six months of her death. They don't yet have a name for the assailant, but changes to the statute of limitations now allow for prosecuting those cases even if they're decades old. This work meant that, in December 2015, when State Auditor Tim Keller's office surveyed law enforcement agencies about the number of sexual assault evidence packages, or rape kits, stored in their evidence rooms, Santa Fe's count was just 10, and they likely weren't more than a few months old.

Checking back in six months later, the state auditor found zero. The auditor's statewide assessment of the issue, however, found more than 5,440 untested kits, a number that ranks New Mexico top in the nation for per capita backlog with almost double the rate seen in the next worst state, Michigan. Seventy-three percent of untested kits were found in Albuquerque—some 3,948—while northwestern New Mexico, including Santa Fe County, had just 11 percent as of December 2015.

By November of this year, just 2 percent of kits were in this region. The Santa Fe Sheriff's Department, according to the auditor's office, had 203 untested kits in December 2015, and just 22 in July 2016. The department spokesman refused to comment on the report. "We saw this happen all over the state where once the audit started, the local law enforcement agencies started sending batches of the kits to the crime lab," says Justine Freeman, with the auditor's office. "They had the kits for a long time, and then with the power of sunshine and transparency, they started sending the kits in … to the state crime lab." That's where those kits sit now: swabs from the victim's body, clothes, blood and urine samples, and photographs waiting for analysis. The oldest sent in this wave has gone untested for more than 20 years.

State law requires testing every kit as a police report is filed. Why more than 5,000 kits weren't sent a decade or more ago wasn't always documented, but in a sample set where auditors conducted deeper review, for those kits for which a reason was given, over half were set aside because of the officers' assessments of the credibility of, cooperation from or contact with the victim. "These statistics are particularly troubling because they suggest a failure to understand the realities of sexual assault victims," the auditor's report states. Sexual assault victims are more likely to contemplate suicide, experience depression and PTSD, and to abuse alcohol and drugs, and up to half quit or are forced to leave their jobs, the report continues. Therefore, apparent non-cooperation or non-availability is "not an appropriate reason to terminate an investigation."

The pattern also suggests a disconnect with the research on the rate at which sexual assaults are falsely reported, which the National Center for the Prosecution of Violence Against Women pegs at 2 to 8 percent, a rate similar to other crimes. "When we, as a society, believe victims when they speak of their experiences, kits will not sit untested in evidence rooms," the report states. The investigation also identified a lack of financial resources and a lack of handling systems for the evidence as contributing to the problem. "While guns, drugs and money tend to be subject to specialized handling procedures," the report states, "[sexual assault evidence] kits do not." "We would like to see policies implemented to overcome the issue with victims and we would like to see leaders step up and allocate resources for this issue because it's a public safety issue for everyone," Freeman says. -

The Department of Justice's Bureau of Justice Assistance awarded the New Mexico Department of Public Safety a grant worth almost $2 million on Sept. 26 as part of a nationwide initiative to address the backlog of untested sexual assault kits and aid in following any leads that might emerge from testing them. The state Legislature also appropriated $1.2 million to the State Forensic Lab to assist with processing old kits and staying on track with new kits as they come in. But that's not enough money. Processing all untested kits just in Albuquerque will cost $7 million.

"We are hopeful that, because of the light that's shining on this issue right now, that those kits will continue to be sent in in a more timely manner," Freeman says. While the news that New Mexico holds the highest per capita backlog in the nation was disheartening, it's one of the only states that's done an audit of this nature. "I think that's one way that New Mexico can lead even though we're behind in the rankings,"

Freeman says. One in every four women and one in every 20 men will experience at least an attempted sexual assault. Children constitute 65 percent of victims, and people with disabilities 27 to 32 percent of victims. A kit is more than evidence. From the report: "Each kit is a story of both trauma and courage. Each kit represents a person who subjected their body to search and examination in order to increase the chances that the community might become safer. Each kit may become a tool for investigation, for prosecution, or even for exoneration." - See more at: http://www.sfreporter.com/santafe/article-12832-evidence-on-ice.html#sthash.jAAwfx6T.dpuf

The trouble started with a freezer, and the question of just what could be done to get rid of it and open up some space at the Santa Fe Police Department headquarters.
http://www.sfreporter.com/santafe/article-12832-evidence-on-ice.html
Tweet
How do you feel about this post?
Happy (0)
Love (0)
Surprised (0)
Sad (0)
Angry (0)
Tags:
rape kits untested rape kits
With new money, state chips away at daunting backl...
DNA links Las Vegas man to two cold case murders
Comment for this post has been locked by admin.