State police Sgt. Daniel Mosura, who led the audit of the evidence room, testified Stone had stolen all of the opioids and heroin in the evidence room, as well as crack cocaine and some marijuana. Stone also stole more than $22,000 in cash. 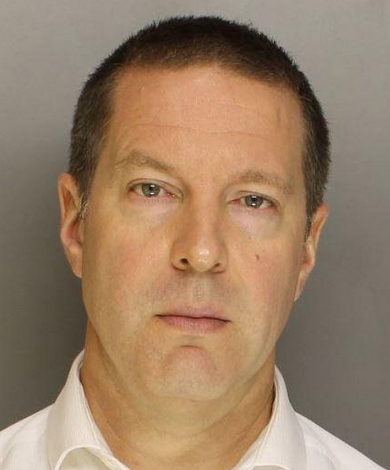 BEAVER — A former Center Township police officer will serve up to two years in jail after he pleaded guilty to stealing drugs and cash from the department's evidence room.

After a more than five-hour hearing, Beaver County Judge John D. McBride sentenced 46-year-old Jeffrey D. Stone, of Center Township, to the county jail, where he will spend the next one to two years, followed by nine years on probation.

Stone, who served as a sergeant for the police department, was taken out of the courtroom in handcuffs by deputies with the sheriff's department.

Called to the stand by the prosecution to present evidence to the judge, Center Township Police Chief Barry Kramer detailed Stone's 20-year-long career with the department.

Stone was hired as a part-time officer in 1996 and, at Kramer's recommendation, was promoted to full time in 1998, Kramer said. Stone was "a well-liked person" and served as an organized and energetic police officer, Kramer added.

Stone assisted the department in starting a DARE program, a nationwide anti-drug curriculum presented in schools. He receiving training and began annually educating fifth-graders in the Central Valley School District about the dangers of drugs and alcohol.

In 2009, Stone was promoted to sergeant. Kramer said he performed well and was a role model to other officers.

Beginning in March 2011, a series of disciplinary actions were taken against Stone as a result of misconduct, Kramer said. The first incident was reported to Kramer through officials at a local Wal-Mart, who had footage of Stone "kissing and touching" an employee in the store's security room.

Stone was on duty at the time. He was also married, and the woman in the footage would later become his fiancee, according to testimony.

Because of the inappropriate conduct, he received a 10-day suspension without pay, and his sergeant status was suspended for one year, Kramer said. Stone was also instructed to undergo counseling sessions to help with issues Kramer believed he was dealing with at home.

Stone was again reprimanded in 2015 along with two other officers for an incident involving a stolen Center Township police cruiser. Three officers were involved in a chase in pursuit of the stolen vehicle. Seated in the back seat of one of the cars was a resident who was initially involved in the incident.

While the resident was not in Stone's car, it is against department policy to engage in a chase while a non-police person is in the vehicle. Stone was the officer in charge at the time, Kramer said.

He and the other officers received a disciplinary letter and were required to reaffirm their understanding of department policy.

Shortly after that incident, Kramer learned from other officers that Stone had asked them to tell his wife he was working even when he wasn't, if she should call to check. Kramer said other officers reported Stone appeared to be unfocused in his day-to-day dealings inside the department.

At that point, Kramer learned Stone had never completed the counseling sessions he was required to attend after the March 2011 incident. As a result, Stone's rank as sergeant was revoked.

In October 2016, several officers reported Stone had appeared confused while he was working and seemed to be impaired. Others reported he spent much of his time in the evidence room.

Kramer said he went to the room, where he found evidence had been tampered with, and said it appeared someone had been consuming drugs at the desk. Kramer then contacted state police who responded and conducted an audit of the evidence room.

As a result of the evidence tampering, officials had to either dismiss or not file charges in six criminal cases, one of which was an assault.

State police Sgt. Daniel Mosura, who led the audit of the evidence room, testified Stone had stolen all of the opioids and heroin in the evidence room, as well as crack cocaine and some marijuana. Stone also stole more than $22,000 in cash, Mosura said.

If Stone had asked for help, Kramer said he would have immediately gotten Stone into a substance-abuse treatment program.

"I trusted him wholeheartedly," Kramer said of Stone's role as the evidence custodian.

Stone, Kramer said, damaged the reputation of the police department and all of the officers who trusted in him to uphold the oath of police. Kramer counted Stone as a friend and said he felt "betrayed" by the lies told to him and other members of law enforcement.

"It's probably been the darkest time of my career," he said.

"That's not what we do," Kramer said. "Police officers don't do this. When they do, they have to be held accountable."

Stone's daughter, a senior in high school, testified she went through the DARE program led by her father. She said her love and trust in him was diminished and called his delve into substance abuse a "complete betrayal."

Several family members, including his father, testified on Stone's behalf. According to those who spoke, Stone has been free from drugs for more than a year after he completed an inpatient rehab program, followed by an outpatient program and 90 Narcotics Anonymous meetings over the span of 90 days.

He has gained employment, they said, and has become an active member of his family. Stone is not, according to his family members called to testify, what the prosecution described of him.

When he took the stand himself, Stone said there were no words he could put together to apologize to the people hurt as he devolved into his addiction.

He has lost a relationship with his two daughters because of his actions, he said.

"There's nothing I can do to bring it back," Stone said.

According to his testimony, Stone's daughter told him that when she first learned something was wrong, she was worried he had been shot and killed in the line of duty. Stone said he wished that were true.

"I wish I had died and was someone they could be proud of," he said.

Stone said losing the respect of Kramer and his fellow officers has been difficult.

"I am suffering every day of my life," he said.

"How offensive is it that the DARE officer was a drug addict?" he said.

Stone then described the nature of addiction and how he ended up stealing from the department. It began, he said, with prescription pills and, like so many others, led to heroin.

"It's a pathetic existence, but I had to do it," he said.

Though he has been drug-free since receiving treatment, Stone said it will be a lifelong struggle.

When providing his sentence, Judge McBride affirmed that and instructed Stone's family to always stay with him and guide him away from the temptation of his addiction.

"He will be an addict until the last day he walks on this earth," McBride said.

He also affirmed his faith in the Center Township Police Department.

"Your reputation has not been sullied," he said.

McBride pointed out that over the course of his career, Stone lied to nearly 2,500 fifth-graders, to his employer and to the community at large.

"All of the lies you've told have caught up with you," he said.

According to court records, Stone pleaded guilty to theft, obstruction of justice and tampering with evidence.