Resolving the issue has spanned three different police chiefs. However, Chief Tammy Hooper reports the evidence room is cleaned up and fully inventoried. 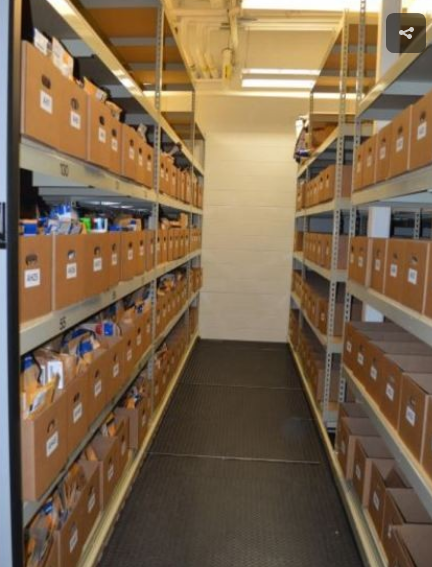 ASHEVILLE, N.C. (WLOS) — The criminal justice system relies on evidence, yet Asheville Police Department's (APD) own evidence room was once investigated for a crime.

Resolving the issue has spanned three different police chiefs. However, Chief Tammy Hooper reports the evidence room is cleaned up and fully inventoried.

Hooper said when she started her job in Asheville in July 2015, the evidence room was in poor condition with stuff everywhere. Now APD is happy to show how clean and organized it looks.

"It's critically important to the prosecution of any case," Hooper said about the importance of evidence.

APD has spent years literally cleaning up its evidence rooms. Prior pictures show evidence stuffed into shelves, guns in a trash can, and items requiring cold storage kept in something that looks like it's from your kitchen.

In 2014, Mark Byrd, then a lieutenant, was assigned to oversee evidence. When News 13 interviewed him in 2014, he described the evidence room as having no space, "Like an episode of hoarders", and "A logistical nightmare."

"It's a lot better. We made tremendous improvements within the property and evidence section," Captain Byrd said.

In 2011, an audit of the evidence room found 115 missing items, including guns and drugs.

"Our credibility was at stake," Byrd said.

In 2014, former Evidence Manager Lee Smith was sentenced for taking evidence from closed cases. During that investigation, police had to start another evidence room and considered the old one compromised.

"It was very serious. Certainly a lot of issues came to light when I was down there," Byrd said.

They had a 20-year back log of evidence items to "Lay hands" on. That term means, "That personnel in property and evidence physically touched, verified the existence of and researched each of the items," APD Spokesperson Christina Hallingse explained.

"You would go back to research that piece of evidence, and you couldn't find any information on it," Byrd said.

"I used to just stand there and think, 'There's going to be a way we're going to do this. We're going to get it.' We had the right people in the right place at the right time," Tim Scapin, the APD evidence manager, said.

He took the job in 2013. Byrd and Scapin made recomendations to improve the situation, such as adding high density shelving. Those recommendations were approved. APD provided pictures, detailing what the evidence room used to look like compared to now. Items now have bar codes so they can be located and researched easily.

Hooper says the new shelves created 60 percent more space, which they can grow into.

"When I came here, you could barely walk through the room. Now, it's organized and neat, and, like I said, we have room to grow. So, it's been a pretty amazing difference," Hooper said.

Byrd and Scapin said once they got guidelines from the police chief and district attorny about what could be properly purged, the process began to go quicker.

"That was basically the key that opened the door to allow us to move forward and get our hands on items, research the cases, and get things out the door," Scapin said.

Now it's praise Chief Hooper wants to send out the door.

"Super proud, for sure," she said.

Hooper also wants to praise the six full-time and four current temps who work in property and evidence. A final report is being finished for the end of the year, detailing the completion of the inventory and purge of the evidence items.

Hooper said there are roughly another 5,000 pieces of evidence that could soon be eligible to be purged, pending court orders.