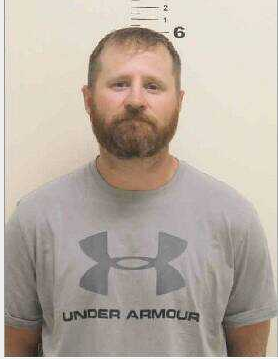 PLYMOUTH CO. — A total of 11 charges, including six felonies, were filed into the Iowa District Court for Plymouth County against former Plymouth County Sheriff's Deputy Aaron Leusink, on Thursday, Sept. 23. Leusink was terminated from his position at the sheriff's office on April 23, 2020.

The six felonies include five counts of burglary ranging from 1st to 3rd degree, and one count of felonious misconduct in office. Four misdemeanor counts of theft ranging from 4th to 5th degree and an additional misdemeanor count of unlawful possession of prescription drugs were also brought forth as obtained in the criminal complaint filed by Special Agent Trevor Modlin of the Iowa Division of Criminal Investigation (DCI), Major Crimes Unit (MCU) from Zone 2 based in Sioux City.

The court reviewed the complaint and found probable cause to believe the defendant committed the offenses as charged and a warrant was issued for Leusink's arrest on Wednesday, Sept. 23. Leusink was subsequently brought into custody on Thursday, Sept. 24, and is awaiting an initial appearance.

Evidence linking Leusink to the burglaries was located at his residence during the execution of search warrants on April 20, 2020, and May 13, 2020.

The April 20 execution of the search warrant found over 1,600 prescription medication pills in plastic baggies in a locked safe and in other areas of Leusink's bedroom. Other items retrieved included multiple evidence bags from the Plymouth County Sheriff's Office which were either ripped open or left unsealed, evidence from another case Leusink had previously worked which included a thumb drive and iPhone, and $5,432 in cash in another safe. Missing from one evidence bag were 17 Hydrocodone pills from an investigation Leusink previously conducted.

Following this search of Luesink's home, he was placed on administrative leave from his position as a deputy sheriff.

Other investigations found body camera footage of Leusink burglarizing and stealing items from other residences. On April 17, 2020, DCI agents met with administration of the Plymouth County Sheriff's Office in regards to Leusink. A review of body camera videos for an internal department investigation showed video of Leusink burglarizing a residence at 35008 C-30 and stealing prescription medication. On two other occasions, while executing search warrants, Leusink seized prescription medication bottles. On Dec. 19, 2019, a search at 22843 Hedge Ave, Leusink seized a baggie of pills that were later entered into evidence at the sheriff's office. When completing the return of the search warrant to the court at the Plymouth County Courthouse, Leusink did not list the pills when completing the return. Leusink is seen and heard on the body camera intentionally covering the camera while handling the pill bottles.

On Jan. 7, 2020, Leusink assisted two other deputies with a search warrant at 28847 South Ridge Road. While the warrant included just the basement bedroom area of the house and the vehicles on the property Leusink entered the kitchen counter and began picking up medication bottles that are in a plastic bag. Leusink then left the house but returned and covered his body camera. The affidavit said a small portion of the video remained uncovered and Leusink was seen in the kitchen where sounds familiar with the opening and pouring of pills is heard.

In a statement released by Plymouth County Sheriff Mike Van Otterloo, he stated that the actions of one individual do not define the Sheriff's Office.

"Every day the employees of the Plymouth County Sheriff's Office put forth a tremendous amount of effort to serve with integrity, honesty, and public trust," Van Otterloo said. "It is disheartening to have that effort tarnished by the action of one person, whose misconduct does not define who we are. Former deputy Leusink neglected his oaths in acting in a manner unbecoming of an officer of the law. He will face the consequences of his actions. Meanwhile, the men and women of the Plymouth County Sheriff's Office are dedicated to serve and protect and will continue to do so."

The criminal investigation being conducted by the Iowa Division of Criminal Investigation is ongoing.

It is noted that a criminal charge is merely an accusation and the defendant is presumed innocent until proven guilty in a court of law.