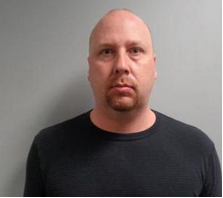 A former Haywood County Sheriff's Deputy charged in 2018 with several felonies related to the theft of evidence, including narcotics, will be spending at least the next seven years behind bars.

Kevin Smathers pleaded guilty to all of his original charges Monday morning in Haywood County Superior Court — charges that included 16 counts of breaking and entering and one count of trafficking opium or heroin.

Smathers was initially terminated from the Haywood County Sheriff's Office in Aug. 2018, after which Sheriff Greg Christopher requested an SBI investigation, as well as an outside audit to reassess the inventory of the evidence room. Smathers was eventually indicted on the 16 felonies in February 2019.

Smathers began working for the sheriff's office in 2007 and was promoted to detective in 2015. The breaking and entering convictions stemmed from his unauthorized access to the evidence room.

In a press release sent out after Smathers' indictments in 2019, Christopher said the situation was painful for many people.

In a press release issued this morning, the Christopher said he hopes his office can put this behind it, but added that it will "not be forgotten."

"I am very sorry for the pain Kevin's family has endured as a result of this incident and will continue endure," he said in that release. "This incident caused our office to review and completely revamp our evidence policy and procedures to include a 100 percent item-by-item audit conducted by an independent company."

Christopher also said in the release that along with the audit, the office also now has a full-time evidence technician. He had words of praise for those who prosecuted the case.

"For years, our office has worked very hard to build and maintain a level of professionalism and integrity that our law-abiding citizens can be proud of, and we are committed to continuing this environment of trust and effectiveness that our communities deserve," he added.

Smathers was ultimately sentenced to 90-120 months in prison and ordered to pay a mandatory fine of $100,000 related to the trafficking charge.

A former Haywood County Sheriff’s Deputy charged in 2018 with several felonies related to the theft of evidence, including narcotics, will be spending at least the next seven years behind
https://www.themountaineer.com/news/former-deputy-pleads-guilty-to-evidence-theft-trafficking-charges/article_09bb1ede-51ab-11ea-9bbd-03b9663d3a6b.html
Tweet
How do you feel about this post?
Happy (0)
Love (0)
Surprised (0)
Sad (1)
Angry (0)
Former police officer admits evidence bid crime in...
Upgrading Santa Fe police evidence room could cost...
Comment for this post has been locked by admin.